The first time my friend's kid got to ride Volcano, he asked me why there was a Jamaican lady doing the announcements. 😄
Reactions: Gavin, Nicole and warfelg

belsaas said:
The first time my friend's kid got to ride Volcano, he asked me why there was a Jamaican lady doing the announcements. 😄
Click to expand...

belsaas said:
The first time my friend's kid got to ride Volcano, he asked me why there was a Jamaican lady doing the announcements. 😄
Click to expand...

Here are some official theming documents from Paramount for Volcano.
View attachment 040120-031819.pdf
Reactions: RollyCoaster, Eric, Hokie305 and 5 others

Reactions: Eric, lightninlady, Joe and 2 others

Lmfaoo. It's funny looking at all the other proposed names, taglines, and logos.
Reactions: Luke

"Terror in the Congo" is far better than "The Blast Coaster". Can't believe they whiffed on that.
Reactions: Nicole, DangerRaide and belsaas

It does, but I feel like it’s not nearly as distinctive (or descriptive) as “The Blast Coaster.”

Would've opened the door wide open for a Billy Joel sponsorship, though.

Volcano: The Floor Is Lava

Damn you are good. Throw some random furniture in the queue line to up the fun.
Reactions: halfabee

I want “the floor is lava” to be Pompeii’s new send-off spiel now.
Reactions: DangerRaide

My guess is the civil war in Congo forced their hand in shying away from using "Terror in the Congo". The war broke out in '97, right around the time KD would have been putting the ride marketing together.
Reactions: mtorange, Nicole, DangerRaide and 5 others

A few show ideas Paramount had for the Volcano area.

What a shame that show never came into fruition. It sounds spectacular. (Although I suppose it all would have been lost now, anyways...).

Also, this is further evidence that the park did originally plan for the enormous Lost World waterfall to be used for Volcano too. Again, a shame it was never used, but it would all be in the past at this point.
Reactions: Luke, scottyholiday, Hokie305 and 2 others 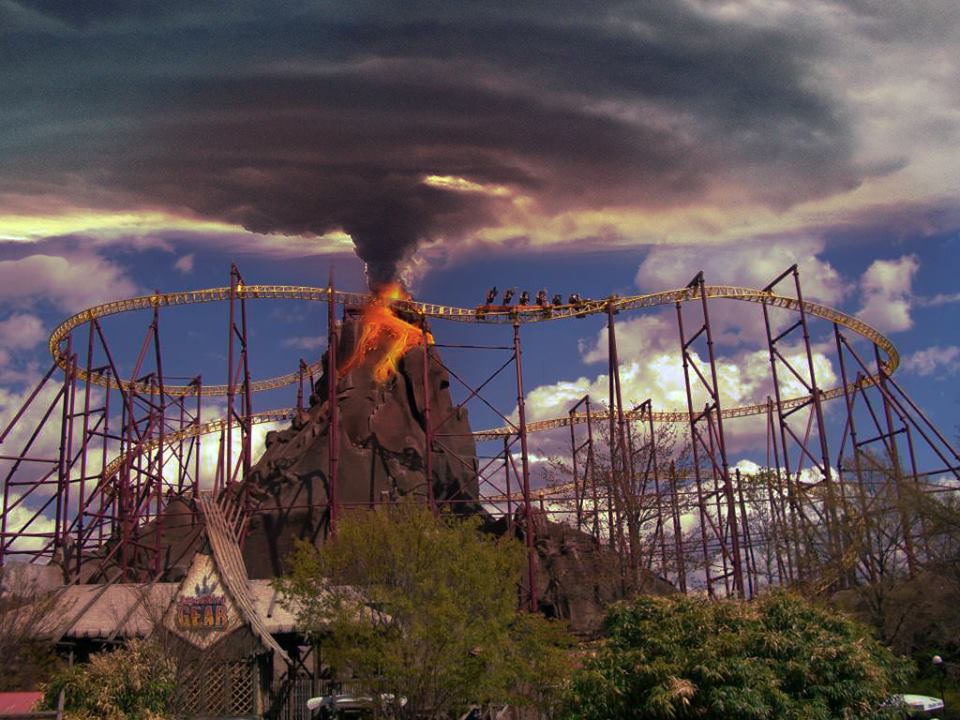 This sign is outside of the entrance and there is another one next to The Scrambler.
Reactions: VikingvadR

Those were added in early July. They used to be in the queue and now they're on the path so guests can still play the Volcano character in the game (but does anyone actually?). Here's a picture of the one by Scrambler.
Reactions: CastleOSullivan and Zachary

The remains of "Volcano, the Blast Coaster" is now in The National Roller Coaster Museum Plainview, Texas