Wow. That’s more Disney-like than anything I EVER expected to come from KD. I absolutely adore the song as well.
Reactions: RollyCoaster, Red Drum, jeffh and 2 others

When do the monster trucks start?
Reactions: UncleDuncan, RollyCoaster, Red Drum and 3 others

This all looks way more expensive than I would have expected. It's amazing that they can justify this much work for a few-week-long event.
Reactions: belsaas, Joe and jeffh
J

Zachary said:
This all looks way more expensive than I would have expected. It's amazing that they can justify this much work for a few-week-long event.
Click to expand...

The parade came out of the gates next to Twisted Timbers at 9pm and stopped along Candy Apple Grove, where I took the video. After it passed us, we went over to ride the antique cars and went back up to Eiffel Tower around 9:45pm. I expected that the parade would have made its way up to Eiffel Tower and continued out a gate, but at 9:45pm all of the floats were still lined up and there was still dancing right there in front of the stage. While the dancing and singing and music was going on, spectators were able to get good close-up looks and pics of the floats (which were stationary and lights on) and that was really nice to see up close.

Oh yeah, and at the food booths be sure to look for a blue pamphlet called "Grand Carnivale Passport" as it has a directory of the country displays (which are all on International Street) and the menu items for each.
Reactions: RollyCoaster, VACoasterFan, Joe and 3 others
M

Thanks for the video of the parade. CF/KD certainly went over the top on this event!

The only thing I could suggest is having scattered spots of diffuse light shining down on the parade route. The grove paths are pretty dark and you can barely see the parade performers. With all the money spent on the elaborate costumes, I would think you would want to show them off more.

Keep in mind that the spot lighting would be diffuse and not harsh. I guess the park could set up temp light poles 12-15 feet high and have 2-3 spots on each one. Those spots could be of one color or changing colors; about 12 feet in diameter when projected on the street. They could be staggered along the parade route; maybe 12-14 feet apart. They would "highlight" the costumes as the parade performers pass by.
Reactions: CastleOSullivan, jeffh, belsaas and 4 others

The floats are very impressive, and not something I would have ever expected to see in KD. The food booths and cultural displays / photo op locations are pretty nicely done, too.

It is a shame that staffing across the park seems to have taken a deadly nose dive compared to our early Spring visits over the past couple of years. After today, I remember why I haven't visited KD in the Summertime in almost 30 years.
Reactions: Joe

mwhinva said:
The only thing I could suggest is having scattered spots of diffuse light shining down on the parade route. The grove paths are pretty dark and you can barely see the parade performers.
Click to expand...

Worth noting that the video you saw was taken after 9PM and the actual parade begins at 8. There was still plenty of light for the parade tonight. Far more than at last night's rehearsal.

KD went all out on this. It's so much fun!!! And we havent even mentioned all of the spectacular side performances around the Eiffel Tower. 10/10 from me.
Reactions: jeffh and Zachary

Red Drum said:
It is a shame that staffing across the park seems to have taken a deadly nose dive compared to our early Spring visits over the past couple of years. After today, I remember why I haven't visited KD in the Summertime in almost 30 years.
Click to expand...

This should hopefully change once the rest of KD’s international employees arrive by the end of the month.
Reactions: Red Drum, Connor and Zachary

Seems like a good opportunity to use some of these props/costumes for a Mardi Gras themed Haunt maze or scare zone in the coming years.
Reactions: CastleOSullivan and jeffh

Here's a nice article with a lot of pics for those that haven't made it yet... 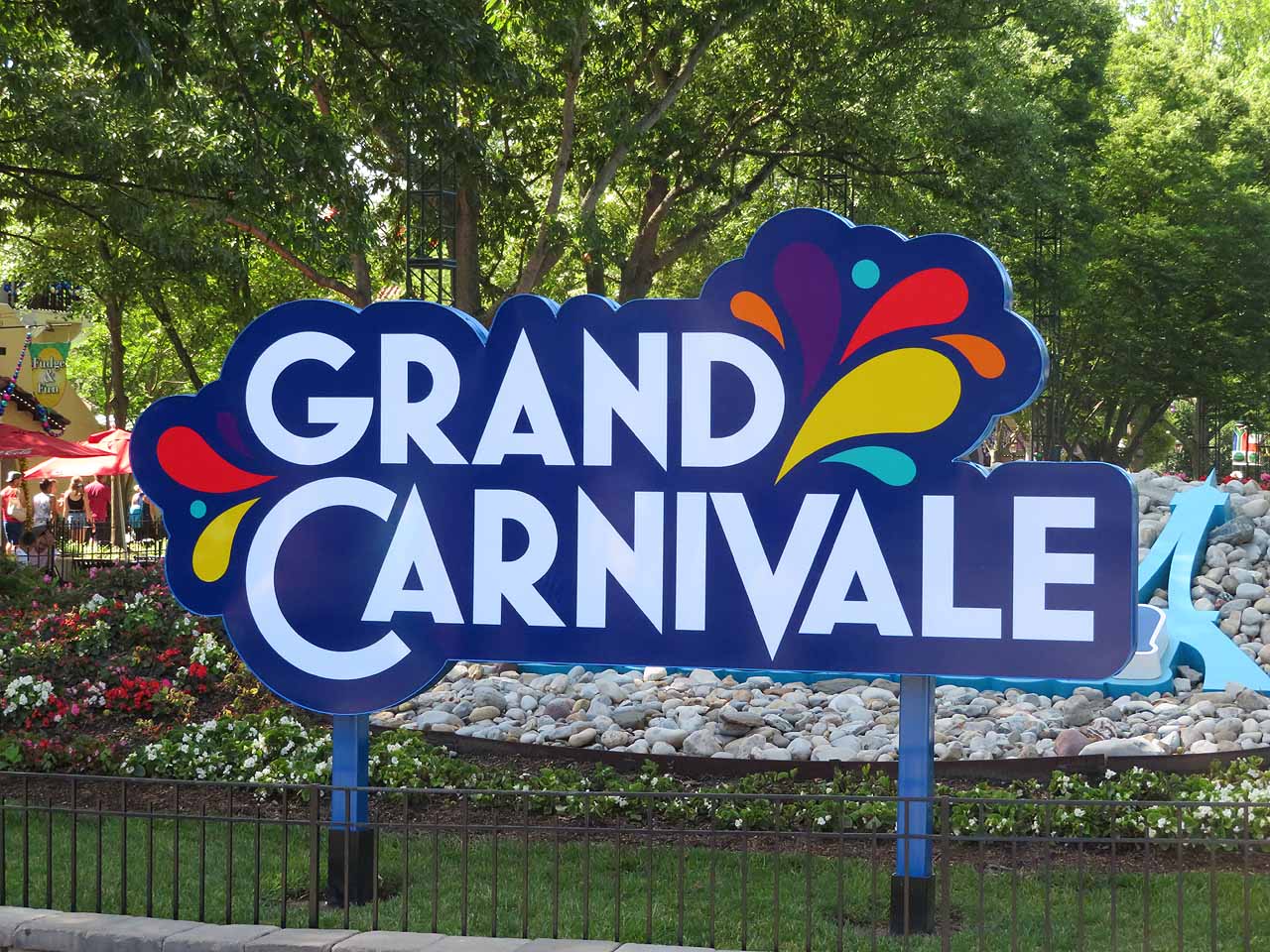 Earlier this year, it was announced that the all-new Grand Carnivale “Evening Spectacular” would debut at four Cedar Fair parks — Kings Dominion, Kings Island, Worlds of Fun and Dorney Park — in 2019. However, when the event was announced...

The Spectacle of Color parade is hands down my favorite part of Grand Carnivale. Not only is it AMAZING, fun, full of energy with dazzling floats and costumes, but YOU get to be a part of the show. It’s just one of the many ways we’re making sure to bring guests immersive experiences all season.

Rode in tonight’s parade.....we had a great time and threw a ton of beads!

Reactions: CastleOSullivan, jeffh, Joe and 5 others

This looks pretty similar to Mardi Gras at Universal Studios Florida, guests throwing beads and all.

Yes, basically the same. The floats looked great, tons of lights, sound system was well done, everything about it I thought was awesome. There were a ton of employes working to pull this off. From costumed, to parade route staff, float drivers and directors and support staff the number of people working on this was pretty high. On just our float who had no costumes people there was a driver, a person directing them, two people keeping us stocked with beads, and about 8 people walking alongside the float.
Reactions: jeffh, Joe, Eric and 1 other person

Reactions: Hokie305, CastleOSullivan, Connor and 6 others

Tried some Carnivale dishes today, sadly could not stay for the parade.

I was not impressed with the food. I had a ham and cheese crepe from France, which had pre-made crepes that were fairly dry. I did really love their crepe holders which you could slowly unravel though! (see attached photo). I think Busch Gardens could really benefit from these in Aquataine.

I had the Emperor's Ribs in China. Perhaps the spices were a tribute to the Emperor's New Clothes, because as far as I could tell, they didn't really exist.

Lastly I tried the curry taco in India, which was by far the worst. Really overcooked chicken, way too much sugar, didn't really taste at all like curry.

I had high hopes... but I don't think I was the only one disappointed. There was no line at any booth anytime I walked by.

Reactions: CastleOSullivan, Joe, Unagi and 4 others

The parade tonight stepped off about 20 minutes late. The signups for riders also filled up quickly today.

The map for the parade route and the culture booth locations.

There is an article in the October 2019 edition of Amusement Today magazine concerning the "Grand Carnivale" event held at KD, KI, WOF, and Dorney this summer. It appears that Cedar Fair is pleased with the outcome of the event. It will expand to Carowinds and Valley Fair for 2020. Cedar Fair is adding a 3rd float fleet to accommodate the newly added parks for 2020. (The article is on the 5th-6th page in the issue - use the right arrow to page into the magazine).

I assume the original 4 parks will have the event again next year. If they gradually add this event to a couple CF parks each year, the chain could get 6-8 years out of each original float fleet. Say, for example, the two California parks get the event in 2021; Then, CP and Canada's wonderland gets the event in 2022.

After the 2nd year, maybe CF rolls out a new set of floats and picks different countries to be represented in Grand Carnivale version II. It appears CF could get at least a 6 to 8 year run of this event in the CF chain.

With Carowinds getting a Winterfest themed parade this year, it is strongly possible that KD could see this parade in 2021 or 2022. (Though, with the short run time of Winterfest, CF will need to build 1-2 more float fleets to rotate every couple years to different parks).
Last edited: Sep 27, 2019
Reactions: Connor, Nicole and Joe
You must log in or register to reply here.
Share:
Facebook Twitter Reddit Email Link
Login or Register to Hide This Ad