I didn't see this coming but I really haven't kept up with this park.  This looked like an interesting ride.  It  would've turned only 4 years old last month. 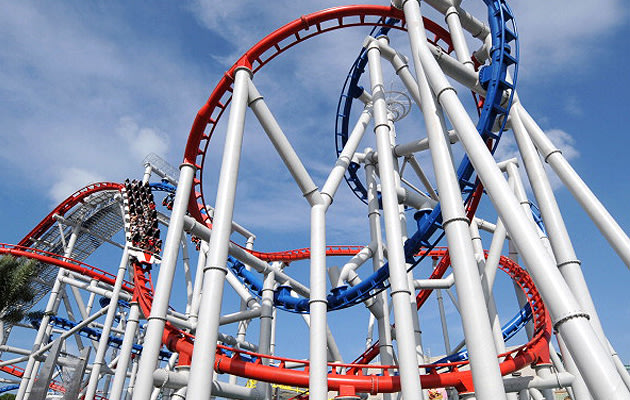 The Battlestar Galactica, a star attraction at the Universal Studios Singapore theme park, is closed for good.

The sci-fi themed rollercoaster, which has been closed since July 2013, will be replaced by a new ride by the end of this year.

MyPaper reported that Resorts World Sentosa, which manages the theme park, said that the Battlestar is "unavailable as it undergoes an attraction review".

It was also reported that the new ride will follow a movie theme, and is expected to have new interiors and a fresh coat of paint, among other changes.

Touted as the world’s tallest dueling roller coaster, the “Battlestar Galactica” ride has been plagued by problems since the theme park opened in March 2010. The roller coaster was closed for over nine months, a week after it opened, due to technical problems. It re-opened in February 2011, but was soon shut down again after cracks were found in the seat-post supports of the coaster cars.
Click to expand...

They forgot to mention the part where one of the seats literally detached from the ride.

By the sounds of the article it seems more like they're rethemeing the ride and calling someone in to fix it completely.

EDIT: I'm saying the last line because I really don't believe what Yahoo is saying with "It will be completely replaced by the end of the year." It's not uncommon for a park to rebrand a ride slightly and advertise it as 'new.'
Toggle signature
Twitter! | Steamroll#1453 on Discord!
Reactions: Zachary and Party Rocker

This makes me sad. I am a HUGE Battlestar fan and was actually planning a trip when ever it reopened.
Toggle signature
Waking up fresh every mornin'; Openin' up for you; Waitin' for your laughter; With so much new to do! Busch—Gardens! Busch—Gardens! Come to Busch Gardens and come to life! Come to Busch Gardens and come—to life!
Contact Me: Private Message | Email | Twitter | Coaster Count
Reactions: superfomi and superfomi

In an article it ( I don't remember which.) it CONFIRMED the ride would be revamped. My money is on Transformers unless they do something crazy and make it Despicable Me themed. I would actually want to see that because they could re-theme the area to Super Silly Fun Land.
Toggle signature
Where is Hummel Boy?
Reactions: Party Rocker

I can't see them revamping the dueling coaster into something that is not a little more adult oriented. This is assuming they don't tear it down.

I wouldn't be surprised if the area became the Wizarding World of Harry Potter and then the coaster could become Dragon Challenge.
Toggle signature
Waking up fresh every mornin'; Openin' up for you; Waitin' for your laughter; With so much new to do! Busch—Gardens! Busch—Gardens! Come to Busch Gardens and come to life! Come to Busch Gardens and come—to life!
Contact Me: Private Message | Email | Twitter | Coaster Count
You must log in or register to reply here.
Share:
Facebook Twitter Reddit Email Share Link
Login or Register to Hide This Ad