Time to make a new sub forum for this yet unnamed park... 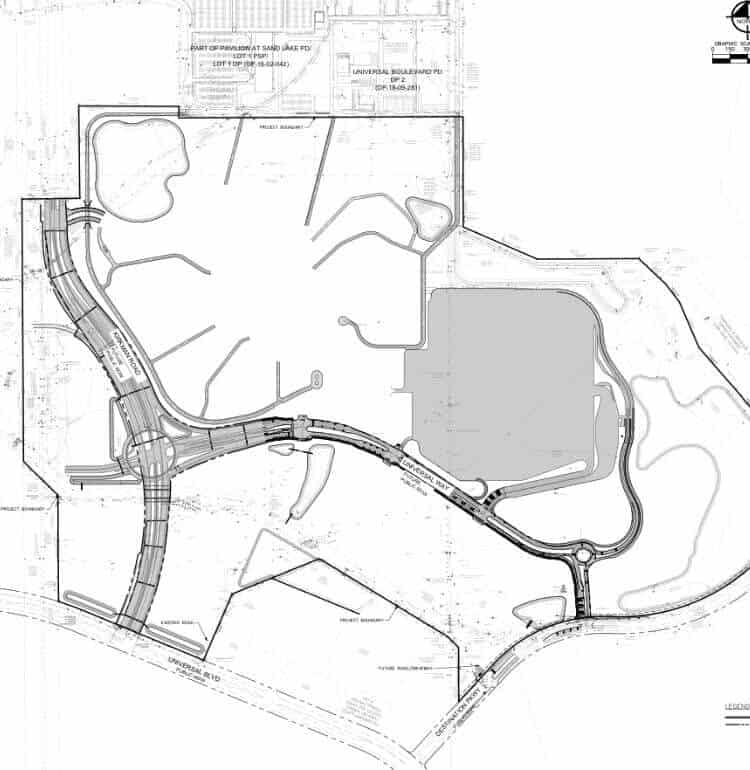 Universal Orlando filed revised drawings for the infrastructure of their new theme park, which offered fans insight on some possibilities of the new park.

A mockup overlay done by Alicia Stella at Orlando Park Stop and on Twitter:
Grey area is a flat parking lot...Yellow will probably be City Walk 2.0
Red area is total park (3rd dry park) inside you can see Islands of Adventure would fit inside
The new park is rumored to be a Hub-Spoke design, Trademarks have been rumored as FANTASTIC WORLDS, but since it looks like Warner Bros. have filed a time to have a 60 day look into with the Trademark. It is also rumored the new park would be open maybe 2022-2023. Big things happening in Orlando, check out Alicia Stella on Twitter and her podcast on Orlando ParkStop, also Bioreconstruct on Twitter has several pics up of multiple trucks in and out daily over the last few months. Until official word from Comcast NBCUniversal all are Rumor and Speculations

that seems like a terrible design to build a theme park around an already existing theme park.
Reactions: belsaas
?

VonDerrick said:
that seems like a terrible design to build a theme park around an already existing theme park.
Click to expand...

This is on a new plot of land
Reactions: Unagi, Zachary and SukaUniFl

Yup it is the new acquired land that they purchased down near the OCCC. The Islands of Adventure map was inserted to show how big the new park will be with it being a huge park based on multiple IP already owned by Universal as what is rumored as being Worlds with probably lands inside the worlds. The so called Worlds that are rumored are DreamWorks, Illuminations, Super Nintendo World, and Universal Classic Monsters (Please have Dracula's Castle...I would cry) and maybe we will get The Ministry of Magic finally and Fantastic Beasts. Also to note the rumor with the hub and spoke design would have a center icon. Hopefully more will start to go vertical, but probably only after the new warehouses and office buildings are put in which are back behind the red areas. As for the 2021 opening that is far fetched, as I think Attractions Magazine may have put that by mistakenly referring to the Universal Beijing park opening in 2021. Also, check out Midway Mayhem on YouTube, Dan actually has gone up on the 450ft Orlando Starflyer and shot some videos showing the location off of Destination Way and close to the OCCC. I will try to get some pics from Bio on the area as soon as I can, but since Mardi Gras has started, I ve been rather busy.
Reactions: Nicole
W

The size is likely going to be IoA-like. Don’t forget they need offices, facilities, and backstage area surrounding the park. If you add IoAs backstage area to its size you get roughly the same sized plot of land.
Reactions: Mushroom