It had very high attendance up until 2016.

As you can see from our earnings release this morning, we delivered record revenues in 2017 driven by record attendance and guest spending, as well as the strong performance of our employees throughout all of our operations. However, our full year 2017 adjusted EBITDA which was down less than 1% from last year's record results were softer than we had expected due to higher operating costs combined with lower than anticipated attendance growth.

On our third quarter call, we discussed the attendance challenges for our parks in the Great Lakes region during the peak vacation months of July and August due to the unfavorable weather patterns on traditionally high attendance days. Although we saw record results in the fourth quarter with strong guest demand for our Haunt and WinterFest events, this was not enough to fully overcome the shortfalls we experienced earlier in the year.
Click to expand...

The Q4 (2017) earnings report from 2/14/18 suggested record attendance and guest spending across the chain. The only parks mentioned to have attendance challenges are those in the Great Lakes region. Kings Dominion has not yet officially released it's attendance record of 2017, but going off of what Richard Zimmerman said, it sounds like Kings Dominion did fairly well this past year. I'm not entirely too sure where you got your information, Madmax.
Reactions: jornor, Joe, SLC Headache and 3 others

If someone has actual evidence that expanding the family area somehow hurt attendance, I recommend creating a new thread for that discussion. Otherwise, I would request that we stick to the topic here, which is the new KD VP/GM.

Has anyone heard anything official about it? We haven't gotten a press release from the park, and it feels a bit sudden.
Reactions: jornor, Joe and Zachary
B

^^-- I would suggest no such thing. The lack of a new roller coaster hurt attendance in 2009 and 2017. In 2017, I think they made up for some slack times at other times, but the slack times in June could be early warning they need to progress. I tend to prefer them just barely managing to survive and add great rides, but some times in 2009 were downright eerie, visit after visit.
Reactions: jornor and Connor

I think this is a good thing, and if you allow me a minute to diatribe and monologue here (with some pure speculation) I can get to why:

Cedar Fair has long kept their parks in different 'tiers'. I've considered California's Great America, Carowinds, and Cedar Point their 'flagship' parks. Nicely spread through the country. At the bottom end you got Michigan's Adventure, Dorney Park, ValleyFair. They tend to get the "hand me downs" from other parks.

Kings Dominion, Kings Island, Knotts, and Canada's Wonderland all live in this middle 'gray zone'. They are big enough and important enough to CF to not get the 'hand me down' rides, but at the same time, they have to do some work to ensure that they don't end up stepping on the toes of the flagship parks.

Ok so we know all of that.

My 'speculation' as to why I'm liking this:
Clearly that middle zone is really muddled up. It's becoming harder and harder to keep attendance up without having to do something groundbreaking. Planet Snoopy was great for the park as it helped with attendance without being something major.

The best way (IMO) for the park to give the 4 mid-tier parks some breathing room to add rides without stepping on the toes of the flagship parks? Find a way to make the flagship parks a 2-gate or 2-day destination. An expansion to SoakCity - Cedar point; do the same thing with Carowinds. I admit doing this with CGA is much more difficult because of space and where the SoakCity is, so make it a 2 day attraction in order to do everything.

Now, you give the 4 mid-tier parks breathing room.

So getting back to why this new VP and GM thing is good IMO:
He's moving from a main HQ position to the park, which to me shows they have a long term vision for this park and where it's going. With the speculation I would hope for, having a guy from there that knows what the plan is can really make sure this goes smoothly.

Even without that, I like this. I think that CF would admit that the PS announcement was a bit of a disaster and that it was 'egg on the face' for KD to push like that. So having someone in that understand the scope and picture of what they want from the corporate level isn't a bad thing at all.
S

^I thought Knott's was the California flagship. Aren't they already a two-gate park, their Soak City being a separate gate?

Also, you forgot Worlds of Fun (and they'd be in the low tier).

SLC Headache said:
^I thought Knott's was the California flagship. Aren't they already a two-gate park, their Soak City being a separate gate?

Also, you forgot Worlds of Fun (and they'd be in the low tier).
Click to expand...

I've never been to Cali (or really researched those parks). I guess CGA because of size TBH. Yea I forgot WoF but they're low tier.

Anyways that was all speculation, but I think this change at the top is a great thing for the park and the chain.

Knott's, is probably too small to be a flagship, but it has its own standing with the farm stuff. And of course the shuttle loop.
Reactions: warfelg

I don't consider CGA a flagship park in the Cedar Fair chain at all. Considering its small size (it's about 1/4 the size of KD) and the lack of attractions the park gets (2 coasters in the last 17 years), there is nothing noteworthy of designating this park as a flagship. It doesn't even come close to the attendance of CW, KI and Carowinds and certainly doesn't bring in the revenue stream as other parks. I'd even consider KBF more of a flagship than CGA based on attendance alone.
Reactions: jornor, warfelg, Connor and 1 other person

Not sure this deserved its own thread, and if so feel free to move things around, but Katelyn Sherwood is also leaving the Kings Dominion team.

Looks like the 2 people who announced Kings Dominions 2018 additions won't have any involvement in the grand opening of anything.. I wish Katelyn the best down in Florida!
Reactions: jornor, Zachary, Connor and 3 others

I wonder if there is something bigger going on here. This is starting to turn into quiet the suitcase parade.
Reactions: jornor and warfelg

It looks like Katelyn's departure is entirely unrelated.
Reactions: jeffh, Joe, jornor and 5 others

Zimmy said:
I wonder if there is something bigger going on here.  This is starting to turn into quiet the suitcase parade.
Click to expand...

Like I alluded to with my speculation....I think KD's level withing the CF tiers is about to change and these replacements are all people with strong(er) ties to CF corporate.
Reactions: jornor

Reading Katelyn's Instagram, is sounds as if she chose to leave for her own professional and personal reasons. People move and switch jobs all the time, because they want a change or something better. I think y'all are reading too much into a coincidence.
Reactions: CoasterAuditor, jeffh, Joe and 4 others

THERE ARE NO COINCIDENCES! Open your eyes sheeple! This is CLEARLY the silent hand of the Illuminati at work!

Okay, clearly when I post at 4am I sound more wack-a-do then I intend...
Reactions: CoasterAuditor, horsesboy, jornor and 4 others

For anyone wondering, it seems Katelyn has been replaced by Maggie Sellers, the park's former Interactive Marketing Coordinator who wrote many of the park's blog posts and played a role in many marketing functions in past years. This is the first time in a large handful of years that the Communications Manager has been promoted from within the park instead of coming from an outside field, so congratulations to Maggie! I've been a big fan of her past work for the park.
Reactions: Peej1212, warfelg, jeffh and 6 others
P

Joe said:
For anyone wondering, it seems Katelyn has been replaced by Maggie Sellers, the park's former Interactive Marketing Coordinator who wrote many of the park's blog posts and played a role in many marketing functions in past years. This is the first time in a large handful of years that the Communications Manager has been promoted from within the park instead of coming from an outside field, so congratulations to Maggie! I've been a big fan of her past work for the park.
Click to expand...

Im hoping that this will be really great for the park. Already being established at KD she may bring knowledge of the inner workings that someone from outside may not have. Plus its always good to see people move and grow within a company.

In The Loop posted a great interview with Tony Johnson. He has an incredible history with Kings Dominion and Cedar Fair, and it's clear that he has a strong passion for the park and its guests.

Reactions: Johnkleindl, MAZ, Zimmy and 6 others

This popped up recently. 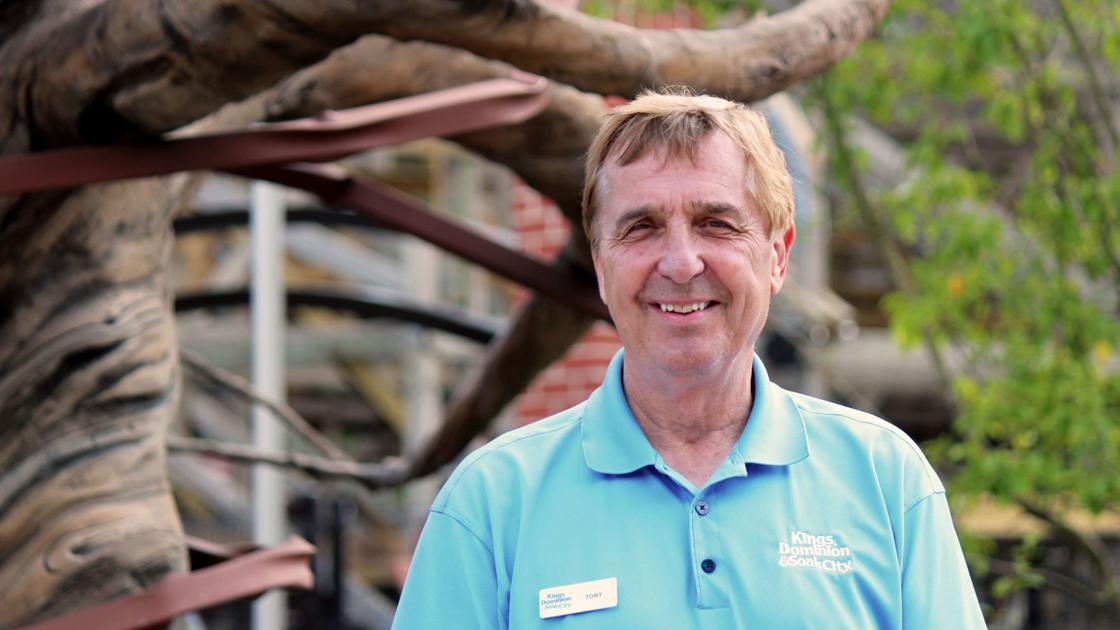 Lohmann: Kings Dominion executive started at the park 45 years ago, keeping an eye on lions and other critters

He’s in the big seat now as general manager of Kings Dominion, but back when Kings Dominion started 45 years ago, Tony Johnson was there then, too.

Wasn't sure where to put this, but ACE did a great Q&A with Tony Johnson which I highly recommend checking out. Tony talks about some about his history and experiences with the park, about the 2019 season and what to expect for 2020, Haunt and Winterfest, behind-the-scenes info, and plans for the park's future. It's a really good watch.