We had a request for a coaster school, where people could discuss theme park basics like types of rides and manufacturers.

I believe there are already good resources around the internet, which I invite people to link here. To get things started, however, I wanted to link a great article written by @Thomas: 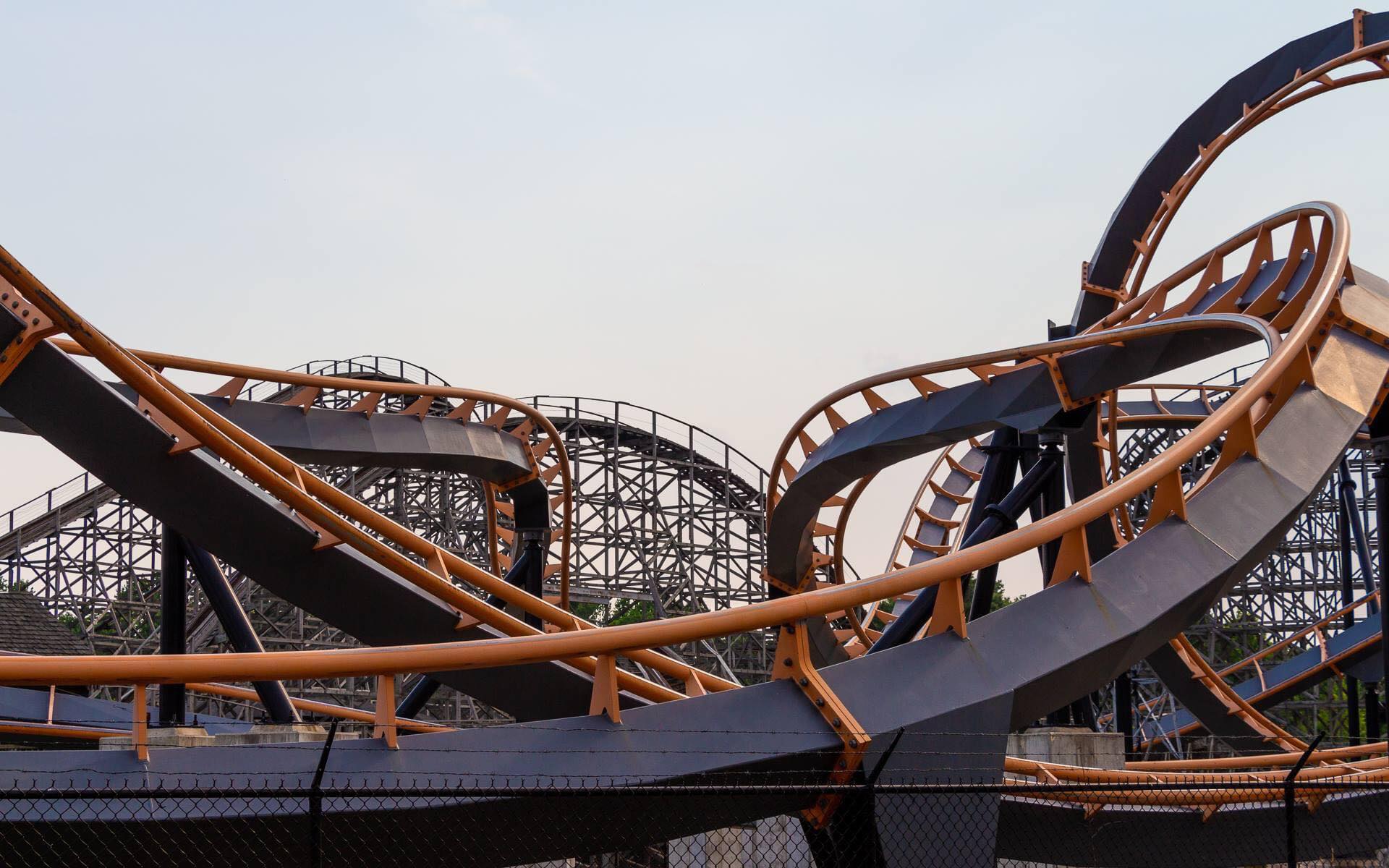 A Brief Examination of the Basics of the Roller Coaster

I've compiled the basic, essential knowledge that I believe every member of the coaster enthusiast community should know (or anyone else who is interested in historical development for that matter). It is brief, but contains a lot of information. I hope you enjoy it and any critiques are...

Much appreciated!
Reactions: b.mac, The Quist and Nicole

Our glossary defines all the most commonly used terms, as well as a few of our own, pertaining to roller coasters and amusement parks. 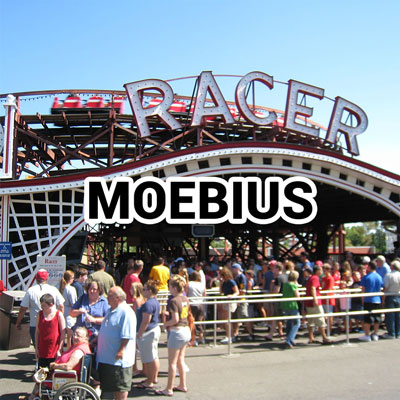 There are loads of different roller coaster types - not just "wood" and "steel". There's Inverted, Wing, Floorless, Dive and many more types to discover! 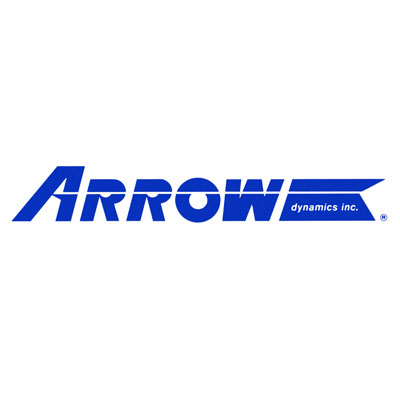 The companies who manufacturer and build roller coasters! All of the big players who bring riders bigger thrills can be discovered with facts and videos!

Inversions are the parts of a coaster that turn riders upside down. Don't know the difference between a Corkscrew and Cobra Roll? Learn here!

The Coaster Force glossary for inversions is a little out of date as it is missing a few inversions unique to some rides that have been built in recent years.

The first one is the Lagoon Roll featured on Cannibal @ Lagoon Amusement Park in Utah: 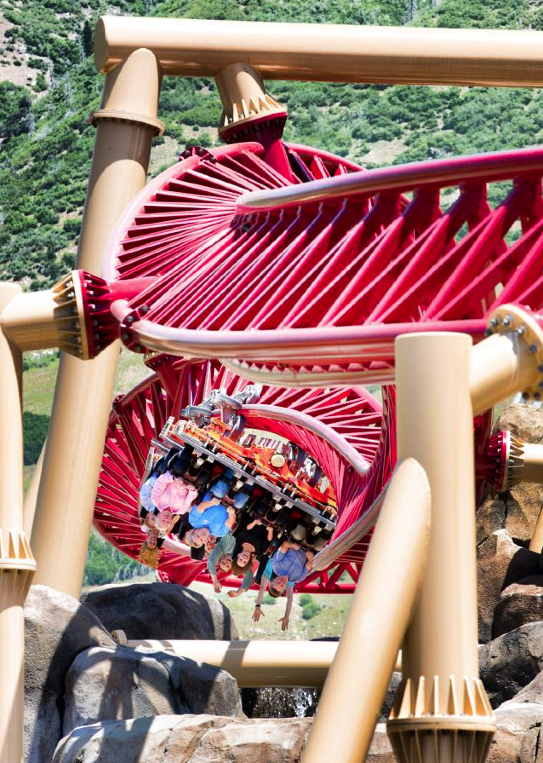 photo credit to News Plus Notes.

The second missing inversion of note is the Finnish Loop. The Finnish Loop is a 2 inversion element similar to its cousin the Norwegian Loop, however instead of exiting in the same direction of travel as it enters it exits in the opposite direction by way of a pronounced Egg-Shape Vertical Loop. Only two coasters currently have this element: Junker at PowerLand in Finland, and Monster at Adventureland in Iowa. 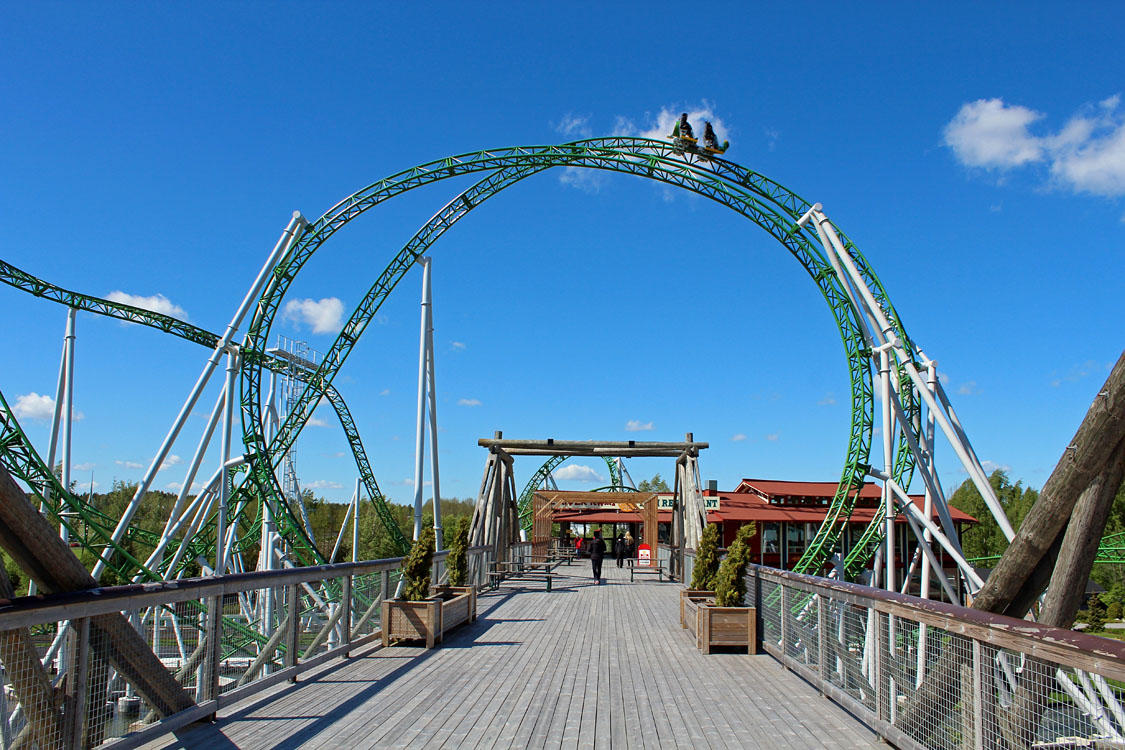 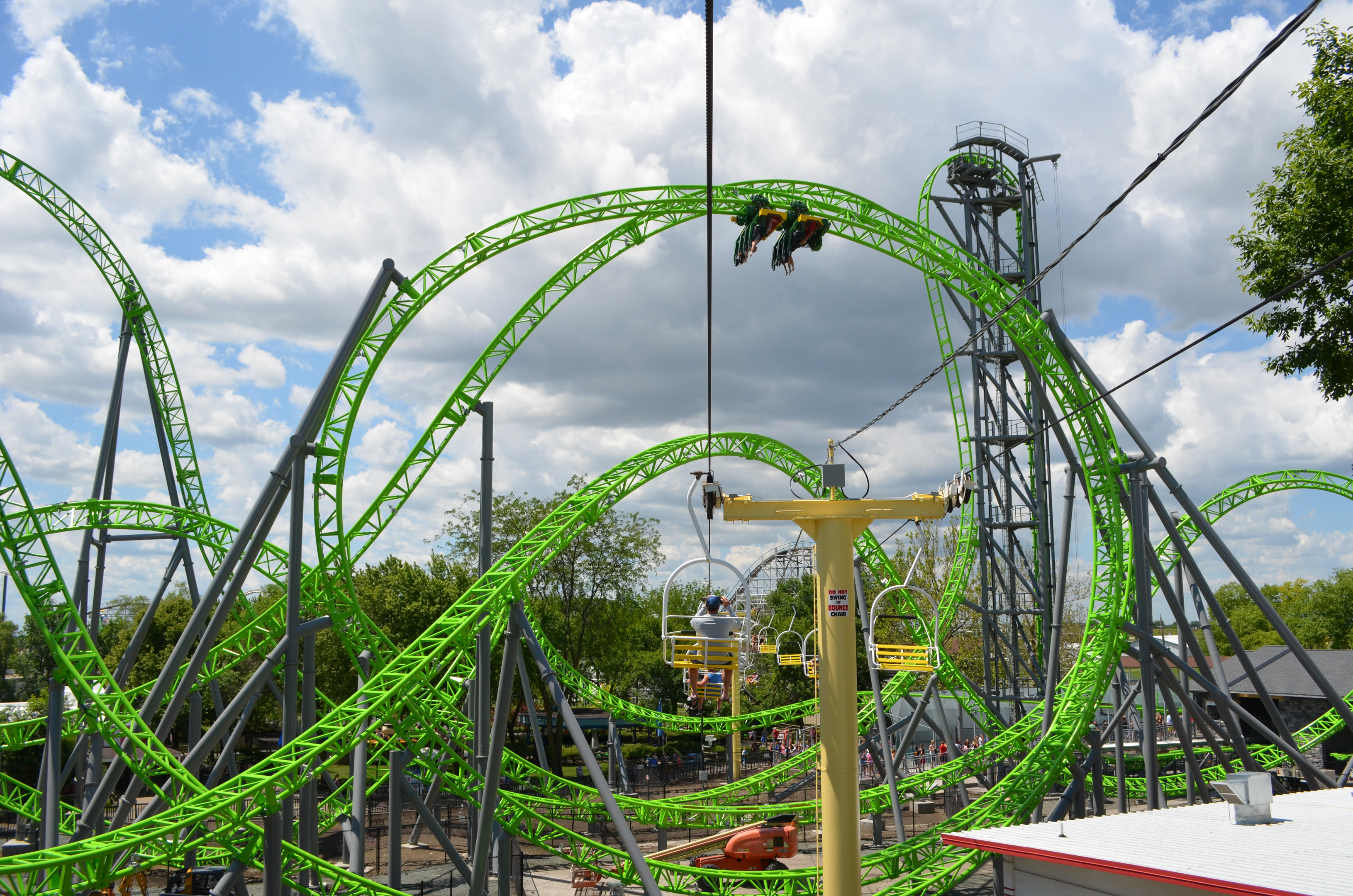 The Final Element I am showing is the Negative-G Stall Loop that currently only HangTime at Knott's Berry Farm has, which acts similarly to a Pretzel Knot but does not invert on the entry part of the element. 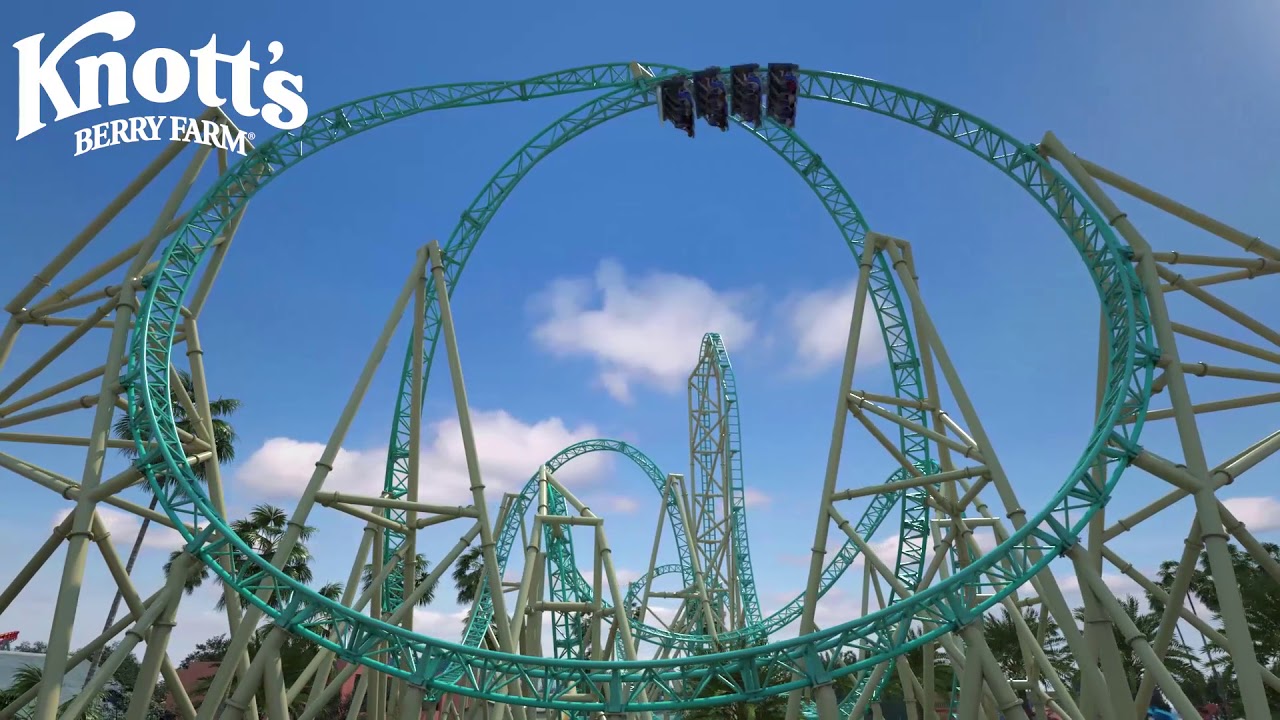 Reactions: Crunchewy, sereniv, ..… and 4 others

Pretty good video from WIRED by Korey from The Gravity Group. Engineer Explains Every Roller Coaster For Every Thrill
Reactions: Crunchewy and ..…
…

I have a question about the blue dummies they’re using to test Pantheon. Why aren’t they using something more similar to crash test dummies with heads, arms and legs? It seems like there would be a weight distribution difference from the dummies they’re testing with that would make the simulation less realistic. I’m sure there’s a reason they do it the way they do - just curious as to what it is.
Reactions: The Quist

Lolers said:
I have a question about the blue dummies they’re using to test Pantheon. Why aren’t they using something more similar to crash test dummies with heads, arms and legs? It seems like there would be a weight distribution difference from the dummies they’re testing with that would make the simulation less realistic. I’m sure there’s a reason they do it the way they do - just curious as to what it is.
Click to expand...

I can't say my answer is the truth, by my speculation is that since there's no intended impact, such as a simulated car crash, there's no need to use those types of dummies.

Pull-through testing is done first to ensure there's a safety envelope around the ride where guests cannot touch their surroundings (though tell that to the R75 lift hill - looking at you chain-link divider fence), so having full-length limbs on the dummies isn't needed.

The forces exerted by modern rides are usually computer calculated and I'm assuming they use some kind of sensory equipment strapped to the train or dummies to ensure the ride is calibrated and not overly forceful (explains why Maverick's cobra roll in the valley was replaced with an S-bend before it opened) in parts of the ride that aren't easily verified with computer simulations.

Finally, these kinds of test dummies use water for weight so they should be much cheaper to use and easier to handle - their weight helps the testing crew dial in a fully loaded train. To your point about weight distribution - my understanding is that human limbs and heads are not heavy enough to significantly alter the weight distribution on the tests, especially when the goal is generally to center the forces around the torso, or more specifically the heartline. Obviously this point is different per person, but I'm guessing the dummies they use provide a good average.
Reactions: horsesboy, The Quist, Nicole and 3 others

Lolers said:
I have a question about the blue dummies they’re using to test Pantheon. Why aren’t they using something more similar to crash test dummies with heads, arms and legs? It seems like there would be a weight distribution difference from the dummies they’re testing with that would make the simulation less realistic. I’m sure there’s a reason they do it the way they do - just curious as to what it is.
Click to expand...

This response is purely speculation and I have nothing to back it up with, but if I were to guess- it would be that the cost and, at this point in testing, it's not needed. When the manufacturer was designing the seats and restraints, I would imagine they would do a full size test dummy to test the seat/ restraint limitations (minimum down sensors, extremity limits, secureness, etc.)

In the pictures below you can see Skyline Attractions was using themselves as the dummies (at least that's what it looks like from the part that they shared publicly) when they were developing the seat and restraint system for their Skywarp models.


Also, humans can control their legs, arms, and such. So the dummies would be doing a lot of flailing around, potentially hitting other parts of the train, as it went around the course. Usually, these dummies are usually strapped in with ratchet straps/ ropes/ etc. to prevent this This is also dependent on the dummy used and train. From my observations, ride testing only needs to simulate weight - so simple water dummies would be fine. Also, because these water dummies are more simple - they can be drained and then removed which makes it much easier, faster, and I'm sure cheaper.

Parks like Cedar Point and Kings Island, due to temperatures, will actually put these dummies on-board almost every single day in the colder months. So it's imperative that operators can add and remove them quickly.
Last edited: Mar 28, 2021
Reactions: The Quist, Zachary, ..… and 1 other person

@I305Evan - but wouldn't you think that a lot of the human tests, like you mentioned above, are more for ergonomics more than for force calculations?

I would think that though they could get a ballpark idea based on a singular seat/restraint system, the proof would be a full train test?
Reactions: ..…, Zachary and I305Evan

@Jonesta6 , Yeah, that's basically the point I was attempting to get across. A full size test dummy (or human) is only needed in the developing steps of the seat/ restraint system (read: in the development of the train). But for the ride testing, they only need weight to program/ calibrate the motors, brakes, launches, add weight to the trains, etc. Thus the simple armless and legless water dummy will suffice for full- train course testing.

And as you mentioned above , a full body dummy isn't needed because they will typically do a pull through test with something attached to the train that simulates a riders arm reach or they may create a contraption to pull around the track that does the same thing.
Last edited: Mar 28, 2021
Reactions: ..…, Jonesta6 and Zachary

The dummies that they are using are easier to remove and move around without water in them compared to the plastic dummies that you may have seen at other parks.