I assumed that the ride was either going to get Vekoma's new vest restraint trains like the ones added to the Great Nor'Easter at Morey's Pier as seen here:

or that Kumbak Coasters was going to build new trains.

Well a local Kentucky Kingdom fan posted in a comment to me a photo of the new trains for T3 and they are indeed Kumbak Trains! There is also video of the ride testing on Instagram if you want to search for it.

The park had admitted that the ride opening was delayed due to the installation of new magnetic breaks which leads me to believe that Kumbak did the entire rehab on this ride has they also installed magnetic breaks and new trains on the SLC at Warner Bros. Movie World, Arkham Asylum - Shock Therapy. You can take a look at their work on that ride here. The main difference is that Kumbak re-used the original Vekoma train chassis on the Arkham coaster where as with T3 they would have needed to build entirely new trains from scratch since Six Flags stole the original trains.

This can only be good news! This officially will be the smoothest SLC in the Americas! I have to say I am extreamly excited, though there is much hate for SLCs. Despite being cloned 100 times the layout is actually interesting. This should be a fun coaster.

Assuming it is indeed a smooth fun ride, I can only hope that other North American parks will experience the improvements and perhaps have Kumbak take a stab at their SLCs. God knows they all need it!

Here is a good shot of what the trains seats and restraints look like. 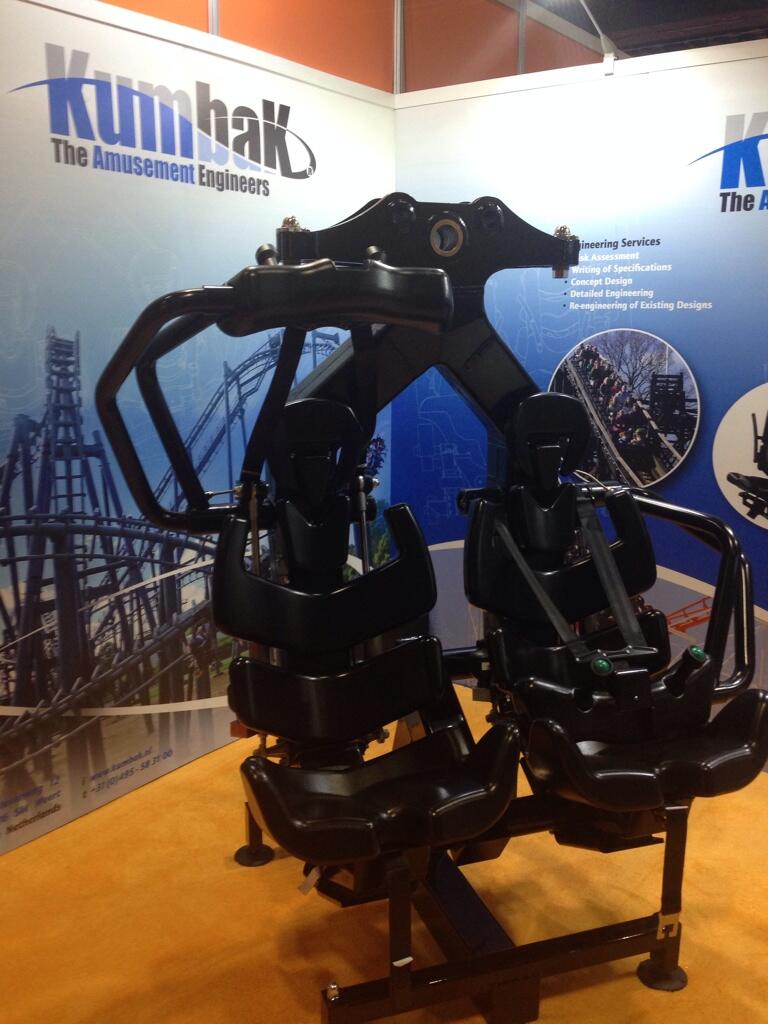 Did you mention the red-on-red color scheme?

I hate it. Who paints their supports the same color as the track? Apparently this was the color scheme before Six Flags bought the park, that's why they painted it that again.

ScreamScape.com said:
(7/7/15) While T3 has reopened at Kentucky Kingdom, you can expect the lines to be long for the moment because it currently only has one train running. I’m told that a second train was purchased, but just has not been installed yet, and I’m not sure when this will be.  As for the ride experience, I’ve heard that it is still a bit on the rough side, though many believe the experience has improved greatly because of the new more open style restraint system that prevents the “hang and bang” problem from the old days.
Click to expand...

I won't get out to ride it until next year when the new Twisted Twins opens, but this is good news. It appears to be lapbar only with OTS style seat belts. They look exactly like the photo I posted above. This is great for all those SLCs out there. I could see Cedar Fair upgrading the few SLC's that they own. I doubt SixFlags will put any money into their SLC collection.

they wanted to be certain everyone saw it!

Other than maybe an all black coaster, I have never in my life seen a coaster that has the supports and track painted the same color. It's ludicrous and I hate to say this... But it really adds to the feeling that you are walking around a park built by someone playing RCT. I told Zach this after I went to the park after its grand re-opening last year, but some of the new rides are just randomly ploped down with weird queue configurations and the park truely is a perfect example of a real life RollerCoaster Tycoon creation.

All that being said, I still love the park, and I think the RCT feel adds to that love. Ed Hart is really playing what all of us want to do in life, he is an RCT player with a lot of money and can play the game for real instead of on his computer. He is living all of our dreams.
Reactions: Nicole