Status
Not open for further replies.

This would be fantastic. Everyone loves the skeleton section of Monster Stomp on Ripper Row. Why not give them more?
Reactions: Alf33

I sure hope this rumor turns out to be true this could be a really cool nighttime show for BGW.
Reactions: luseendesi and Alf33

Per the BGW auditions page that I tried to attach, the name of the show in the RPT this summer is “Spark”.

other things to take note from that audition page

there are street performances,
some performers will get wet from water elements,
the park is basically hiring hype dancers,
and instead of real DJs they are hiring actors pretending to be DJs
Reactions: jornor, CastleOSullivan, luseendesi and 2 others

To my eye, nighttime magic with a personal, emotional touch is 100% what BGW needs to keep folks in the park and spending later.

Some of the Illuminights stuff was actually pretty good (thinking Garden of Invention acrobats in particular), but didn't seem to entice merch sales as far as I could tell. If Light Balance is doing regular shows in the park, glow merch of all kinds should sell to kids the way Festhaus beer sells to adults.

There was a great convo on here some years ago about the park not having a ton of IP to leverage. That's still the case (and I prefer that to every ride being named Batman, btw). Given that, IMO one of the best ways to maximize the value of BGW's largest permanent performance space is to rent the IP season-to-season as the house act, serving as a midpoint between the known-name acts that come through for a single night and the show identities the park has tried to create from whole cloth in recent years.

Light Balance is an act very visibly by and about people, doing something super cool that isn't overwhelmed by big-set spectacle or ponderous story. It has that Blue Man, Stomp kind of spectacle-spirit that resonates. It may be perfect for the park.

And BGW is at its most beautiful AT NIGHT. It's gorgeous. That has gone wildly underutilized during most recent years. Maybe that can change a bit now. Food and Wine and Bier Fest both run through 9 or 10pm Fridays and 10pm on Saturdays & Sundays. A show which guests may actually go home to tell their friends and neighbors amazing things about could be coming to RPT. Projection mapping was basically invented to be brought to outdoor environments like BGW, and hopefully the Wilkommenhaus will be just the first of many spots chosen to showcase it. Such a promising change overall.

I've been visiting this park since 1986, and I really hope they can find a way to drift back toward the late schedule they once followed. At one point you could stay in the park until at least 10pm every single day from mid-June through end of August. Every single day. That hour was the best time to be there too, when the hot steam of the day blew away in a gentle Virginia breeze and every corner of the park had some small feature to see in a different way. Maybe they'll never get back to midnight closes twice per week, but I'd take any added hour of darkness they can manage...
Reactions: Gameboyzee, Flyer, jjofriends and 13 others
W

halfabee, I love everything you just said, and really hope too this means the park is returning to late night fun. Parks at night are so much fun and such a different atmosphere.

As far as leveraging a group like Light Balance into something. I would love to see them use the fact that there is cat walk all around InvadR to work with LB to make a tracerlight show to go with the ride. Would be really cool if they could find a way to do a daytime short show at Globe Theater too.

And I'm with you that for a park without IP to leverage, using a group like Light Balance as a 'residence act' and maybe contracting them to work Memorial Day - Labor Day (that way they can tour in the winter if they choose) would be a big boon for the park. And this is the type of act that will get people talking too.

That would be a nice show to cap off the day at the park. But I think its suited for an indoor theater. Im not sure how well it would work in the Royal Palace Theater outside where light pollution wouldn't hide the dancers. The theater also isn't set up for complete blackout and would be needed for something like this. No matter what they do though....I just want something...anything to keep the park busy till closing.
Reactions: CastleOSullivan

Light Balance won't be in the RPT.

Light Balance will perform at BGW for one weekend in July in the Abbey Stone Theatre.

Spark is the main RPT summer show. The RPT will have a few rows of seats removed to facilitate the addition of a dance floor. That is where the "hype dancers" will be—dancing with guests.
Reactions: jornor, Gameboyzee, Flyer and 12 others


Zachary said:
Light Balance will perform at BGW for one weekend in July in the Abbey Stone Theatre.
Click to expand...

Do you think they will sell reserved seats like the concert series?


CastleOSullivan said:
Breaking: Right now I am hearing new rumors about the new show in the Royal Palace Theater. Allegedly, the park will be hosting the light performance group, "Light Balance" in the RPT.
Click to expand...

This is a confusing thread....

That is because everyone is dealing with rumors, and Zachary and COS likely have different sources.
Reactions: CastleOSullivan


Zachary said:
Light Balance won't be in the RPT.

Light Balance will perform at BGW for one weekend in July in the Abbey Stone Theatre.

Spark is the main RPT summer show. The RPT will have a few rows of seats removed to facilitate the addition of a dance floor. That is where the "hype dancers" will be—dancing with guests.
Click to expand...

Thanks for the clarification. I am actually relieved by this, as this sounds more practical and makes sense with things I've heard earlier this year.

At any rate, the Spritz Team is straight out of BGT's book. They are highly popular at Busch Gardens Tampa and all they do is go around misting people. However, at least in Tampa, they do not randomly go up to people and squirt water on them. Instead, they are a very energetic bunch that goes around spritzing people that want to cool off by a professional Spritz Team. Because of this, I don't find them annoying, but some people might if they don't know this.

The hype dancers are something that every SW/BG park has had for summer events except for BGW. Typically they are non-intrusive to people who don't want to be in the spotlight, and the designated dance floor that Zachary mentioned in the RPT is a crucial part of that. Altogether, this shows that BGW is trying hard to find a perfect balance between BGT's Summer Nights and SeaWorld's Electric Ocean.

I wouldn't be too surprised to hear at least part of the Electric Ocean soundtrack utilized somewhere since it is not specific to SeaWorld's brand. As the park already announced, the new show/event will have original songs performed by award-winning artists. That is exactly what SeaWorld's Electric Ocean soundtrack consists of, with artists such as Svrcina and Worldwide Groove Corp. I doubt corporate would agree to pay extra for a soundtrack exclusive to BGW after already investing so much on these prolific artists for a music lineup that is compatible with all of their parks.
Reactions: Flyer, Zachary, Lord Robert and 4 others

"Spark"? That's the name of the new nighttime RPT show? Not so sure about this generic sounding name; but hopefully the show makes up for that. :irritated:

This was in the fun tracker. 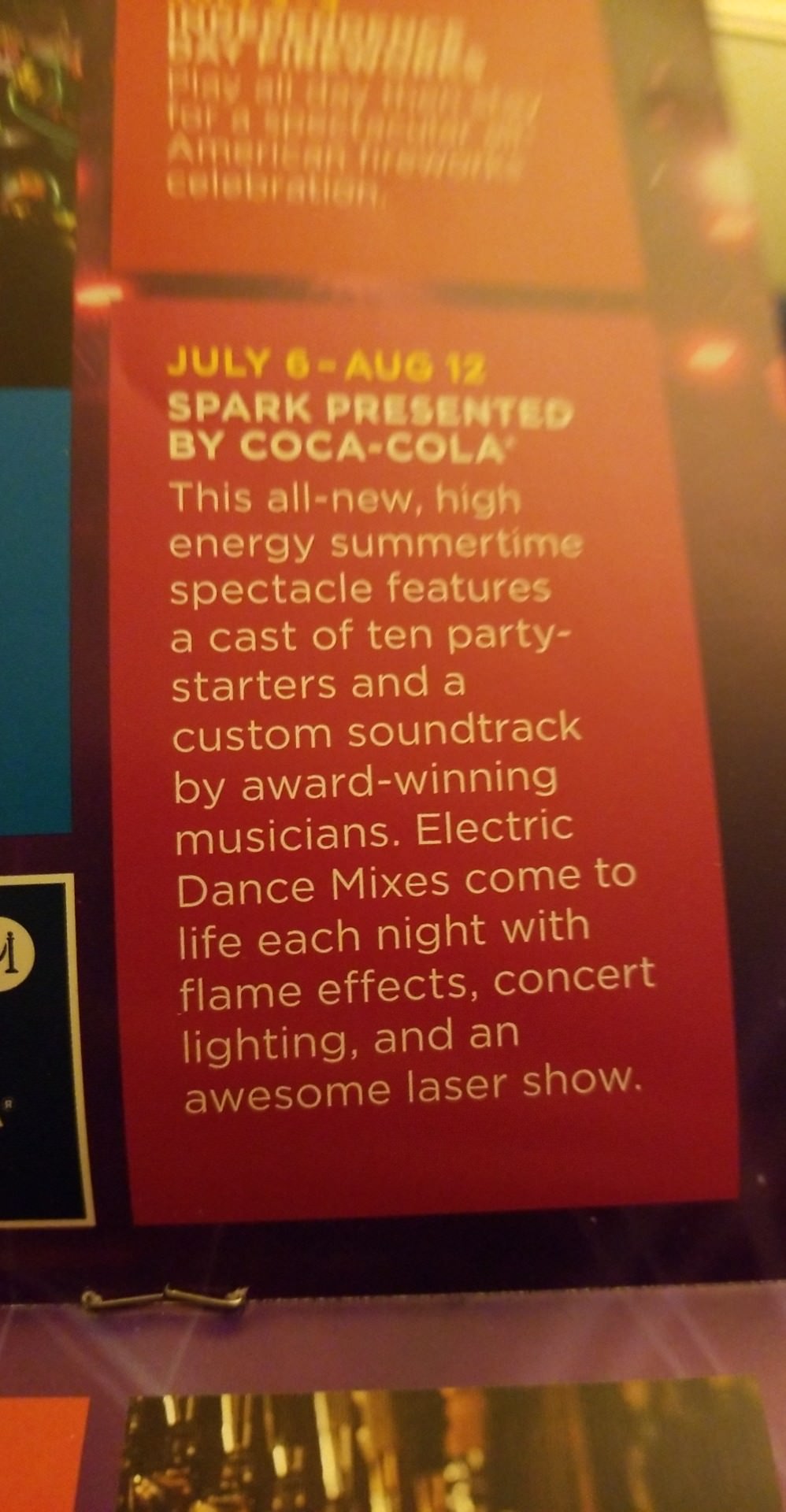 Spark sounds like an energy drink that turns out to be lethal...or better yet it sounds like a communicable disease.

Either way, count me as interested. Oh wait, it starts the day I fly back to FL til Christmas...nevermind.

Also the designer in me is annoyed as the color tone on that flyer is holiday like - also isn't that the Christmas Town map font and typeface? Are they using that for all of their mailers now?
Reactions: Lord Robert

I do wonder what the show will look like; hopefully the sets will look really good.

I was at the park on Wednesday, and it sounded like they were testing the sound system in the Royal Palace Theater just before noon. Lots of Skrillex/Dubstep music. Oh well, at least they can try to time it to the Griffin’s drop?
Reactions: Lord Robert

Sky said:
Spark sounds like an energy drink that turns out to be lethal...
Click to expand...

But this would be a different kind of show, wouldn't it.
?

sotomexx said:
I was at the park on Wednesday, and it sounded like they were testing the sound system in the Royal Palace Theater just before noon. Lots of Skrillex/Dubstep music. Oh well, at least they can try to time it to the Griffin’s drop?
Click to expand...

Status
Not open for further replies.