I've discussed this with @Nicole and decided it would be best to branch discussion for each of the separate rumored attractions featured in the recent Wild Gravity Travels and Behind the Thrills "leaks" into their own discussions in an attempt to not derail conversation regarding Busch Gardens Williamsburg's rumored "Project: Madrid."

If you have no idea what I am talking about, I suggest reading this excellent recap of the insanity that is this leak from OrlandoWeekly.com. It really covers everything you need to know about all of this mess. Just make sure if you want to comment on something specific about one of the rumored attractions that you go to the thread specific to that project.

The Projects:
While it might be difficult to separate these topics since they're so deeply intertwined due to the manner this rumor started, but I'm going to take a moment to recap and summarize rumors related to this individual project.

Here are the highlights regarding SeaWorld San Antonio's Project:

September 12, 2018
Wild Gravity Travels leaked their information from the slides everyone is talking about. In regards to SWSA here is what they had to say:


Wild Gravity Travels said:
Down in Texas wood is coming and planned opening is March or April of 2020. A 100+ foot tall wooden coaster will be coming to the park. A safe bet is either GCI or Gravity Group is building it given their recent relationship with the company; GCI with Invadr and Gravity Group with Oscar’s Wacky Taxi.

Current estimates are being taken for the project which means it could be any company but be projected speed is 50- 55mph and they they want it to be Texas’ longest wooden coaster.
Click to expand...

BGWFans.com reached out to Wild Gravity Travels directly to get more information:

Zachary said:
I can't speak on it. I simply acted as a second pair of eyes on the source document to confirm WildGravityTravels wasn't pulling this stuff out of thin air.
Click to expand...

BehindTheThrills.com said:
SeaWorld San Antonio: A new wooden coaster will be heading to SeaWorld San Antonio, as the park has already filed a few permits that indicate it’s appearance. The new coaster will likely be from the same coaster company that built InvadR at Busch Gardens Williamsburg. The Great International Coaster will likely be a wood/steel hybrid which will make for more maneuvers, and better banked turns. There’s also a strong chance that the coaster could be from Rocky Mountain Construction, the same company behind Steel Vengeance at Cedar Point, and Iron Rattler at nearby Six Flags Fiesta Texas. We only say this because Rocky Mountain Construction builds several coasters a year. SeaWorld also tends to buy “in bulk” so that they they get a better price. They’ve done the same with Premier and their Tempesto, Steel Eel and Tigris coasters. While it won’t be the first hybrid coaster in Texas, it could likely be one of the most unique.
Click to expand...

ScreamScape.com said:
The early word from Screamscape sources regarding the 2020 wooden coaster plans for SeaWorld San Antonio is that the park is expected to use GCI for this one, and much like how InvadR was done at the Williamsburg park, they plan on reusing the remaining GCI Millennium Flyer trains from the closed Gwazi coaster in Tampa.
Click to expand...

Can anyone provide citation for this claim by BehindTheThrills?

A new wooden coaster will be heading to SeaWorld San Antonio, as the park has already filed a few permits that indicate it’s appearance.
Click to expand...

I've not seen news of permits reported anywhere else and they provide no proof for their claim.

I tried to dig through San Antonio's permits myself but only found filings related to their 2019 additions, not 2020.

Zachary said:
Can anyone provide citation for this claim by BehindTheThrills?
I tried to dig through San Antonio's permits myself but only found filings related to their 2019 additions, not 2020.
Click to expand...

I did the same. Their website doesn't seem to contain the same amount of data that James City County's does or I just don't know how to use it. I couldn't find anything either.

I have been hearing similar claims to Behind the Thrills but I have not gotten any solid foundation on the manufacturer. It could swing either between Gravity Group or GCI, and personally I'm on the Gravity Group side of things.

Yeah, but hearing things is a lot different than claiming paperwork has been filed...
Reactions: DolphinzRock, Nicole and b.mac

Hello! Pretty sure this is the construction permit for SeaWorld San Antonio’s rumored/leaked wooden coaster: https://webapp9.sanantonio.gov/bipi2/PermitDetail.aspx?PermitNo=2454386&ptype=1004

Posted 3 days ago on /r/rollercoasters by P1Yeezy...new area of construction across from new Turtle Reef area showing some footer installation.

Thumbs up for new wooden coaster construction. Somebody get a big ass zoom lens, please.
Reactions: SukaUniFl, belsaas and Zachary 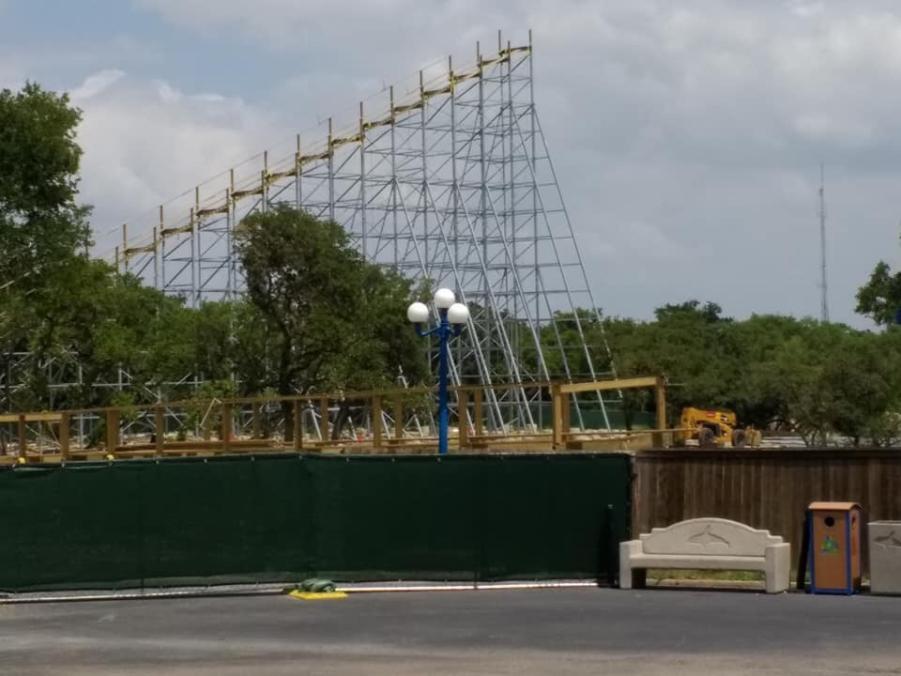 This is gonna be a big boi.
Reactions: SukaUniFl, Eric, Zachary and 6 others

We really need to see some site plans for this thing!
Reactions: Eric and Zachary

Buoy, this thing is going up fast..

This is supposed to be using the other two trains left over from Gwazi.

Hopefully at full length, considering the size of the lift hill.
Reactions: wombat96 and Zachary

Sonar.... Maybe that's where Abyss will be used. (Either that or a sequel to "Run Silent, Run Deep".
Reactions: Zachary

Update photo screenshot from an /u/El_Toro_Ryan video on Reddit.