As stated, no one knows where this leak originated not if it's even close to being on the mark. But, if true, our friends at Intamin are going to be busy...

It's that buy one, get one half off deal they have.

As much as I want to believe it is real, those blueprint plans don't make a lot of sense for a coaster that is supposedly an "AquaTrax" or any coaster really that's going to have a splash down.

The Splashdown element is going to be nearly twice as long as other rides like Griffon or Diamondback; and in order for the ride to successfully cross to the other side of the Voyage they're going to have to modify Voyage's support structure since the barrel roll goes directly through Voyage's lift.

I want to believe it, but I can't.

EDIT: Upon further inspection it looks like the supposed "footers" of this attraction would be placed directly on top of existing attractions or existing attractions would conflict heavily with the layout of this ride. Yeah, this isn't getting my seal of approval.
Reactions: BGWnut and Zachary

So Holiday World's 2020 announcement is at 1pm EST. They're holding an in-park announcement... but have said that they won't be livestreaming it. I can't even begin to understand why parks keep doing this. It's the year 2019. I can watch thousands of people play video games live at any given moment. Why can't parks manage this?

Height limit: 42” to ride with a supervising companion; 48” to ride alone

Who will be the fastest? Race against your family and friends on the world’s first launched water coaster!

The ride features the first-ever head-to-head dueling zone on a water coaster, as well as two other RallyPOINTS™ where rafts will synchronize with one another. Each side also features two FlyingSAUCER® elements—which create “a faster and tighter ride with stronger g-forces,” as well as “maximum curving speed and centrifugal force,” according to the manufacturer, ProSlide.
Click to expand...

Lucky for me, HW is my current local park! I guess I will have to make the 3 hour trip there. Man... I live in a theme park desert.

This is how you do a legitimate announcement. looks at BGW and HP parks funded by massive corporations

This looks so awesome. I really really need to go to Holiday World.
Reactions: Zachary

Zachary said:
They're holding an in-park announcement... but have said that they won't be livestreaming it. I can't even begin to understand why parks keep doing this. It's the year 2019. I can watch thousands of people play video games live at any given moment. Why can't parks manage this?
Click to expand...

That park is in the middle of nowhere and it’s quite possible that they do not have the bandwidth access to livestream an event online. Many of the residents in that area rely on a satellite or fixed wireless internet provider.
Reactions: Nicole and Zachary
J

The only disappointment for me is that it's using a water launch instead of LSM..

Beyond that it looks awesome

Just a sidenote: Whoever is coming up with the color palletes for these slides deserves a raise. ProSlide is seriously making some of the best looking rides in the whole industry IMHO.


Jahrules said:
The only disappointed is that it's using a water launch instead of LSM..
Click to expand...

To be fair, Holiday World already features two magneticly-launched ProSlide water coasters. The fact that these are water-launched is actually a nice differentiating feature for HW.
Reactions: Unagi and BGWnut
T

How come ProSlide uses those "discs" as turning elements on these kind of rides? Instead of just an exposed turn?

Is there a reason other than looks? Performance? Water flow? Just curious...

They are tighter than the average turn.
Reactions: Nicole and BGWnut

I see ProSlide has already made some changes for Cheetah Chase that weren't present for Breaker's or its sister slides. I wonder if ProSlide will be giving these parks thise 3 person tubes to address the issues at hand.
Reactions: Zachary
J

In an absolutely terrible piece of writing; CNN is now claiming this to be the world's first launched water ride... 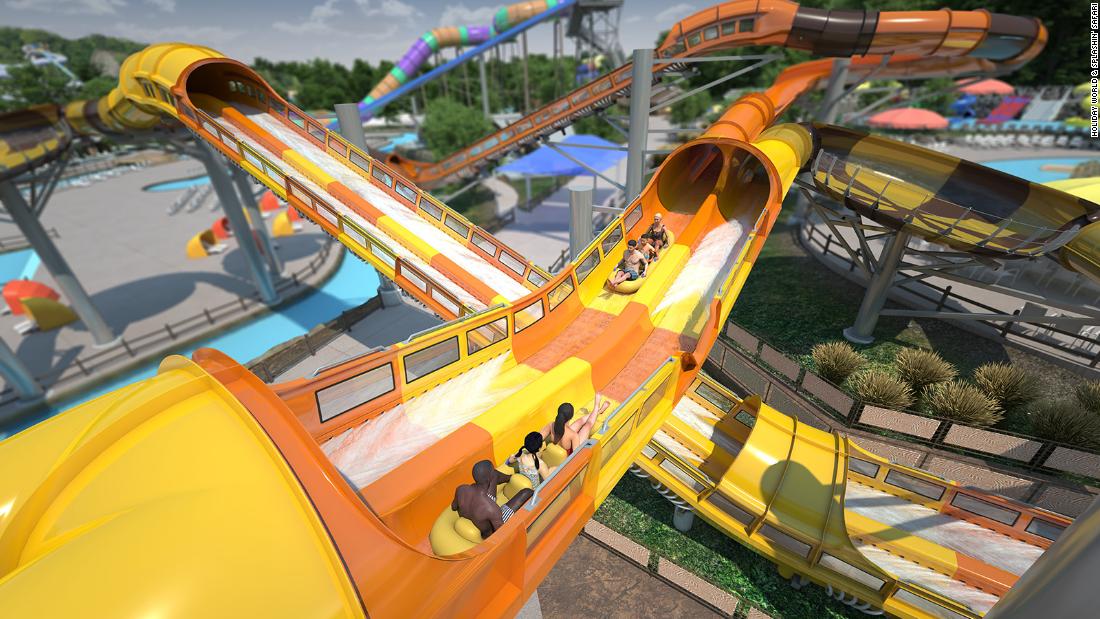 In 2020, Holiday World and Splashin' Safari theme and water park in Santa Claus, Indiana, plans to debut the Cheetah Chase, which the park says will be "world's first launched water coaster."

Not only are they horribly incorrect; they also have managed to contradict themselves in their own article:

"The Cheetah Chase will join two other water coasters at the combo park: Wildebeest and Mammoth. Cheetah Chase will be constructed in Splashin' Safari, Koch said."
Reactions: Howl-O-Scream Fanatic, Pantheon, mountaineers and 4 others
You must log in or register to reply here.
Share:
Facebook Twitter Reddit Email Share Link
Consider Donating to Hide This Ad