Well Terminator 3D replacement has finally been announced by Universal Orlando.
Pic screen shot courtesy of UOR. Also, they have gave the building some love with a fresh coat of paint, and it looks a lot better. I get a friend to send me pics of it, because I am currently at WDW for 11 days.
Anyway it has been announced with a 2020 opening day.

I feel like that would be better suited for the Fear Factor stage, considering that used to be a stunt show. (Miss u wild, wild, wild west stunt show)

That being said, does anyone actually care about the Bourne movies anymore?? I know they came out with one relatively recently, but I don't see big hype for it.
Reactions: belsaas, Zachary and SukaUniFl

I don't but I figured they would announce it since there is a series coming out called "TREAD STONE" which is a prequel to the Jason Bourne movies.
The series starts on October 15th on the USA network, which is owned by COMCAST NBCUniversal.

Waste of time. Hope they bulldoze that whole section of the park soon.
Reactions: Zachary and SukaUniFl

I think they should too. Or at least put something in there that people will enjoy. But since "Bourne" is a IP which they own, my guess is why pay for something, when we can use one of our own.
I do know that some of the actors from the show that use to be over at Lost Continent "Sinbad", are in this show so at least they didn't have to worry like some of my friends that work at Disney and have been cut back or let go. So, be good for the people who went to that show and now see familiar faces. Also, I do believe at some point that there is a Mini Cooper in the building .
I will check it out when TM previews come up or we get to see a rehearsal and give my feelings and feedback on it.

Jesus Christ, that name is amazing.
Reactions: SukaUniFl and blaze_king_420

This Joke it a disgrace to all of the Jason Bourne fan community
Reactions: SukaUniFl
W

Applesauce said:
I feel like that would be better suited for the Fear Factor stage, considering that used to be a stunt show. (Miss u wild, wild, wild west stunt show)
Click to expand...

Very much agreed. I thought they would have done something much cooler with this space too. I got to wonder if they are keeping the Fear Factor stage as some sort of Diagon Ally expansion (Ministry of Magic Ride anyone?).
Reactions: Mushroom, SukaUniFl and Applesauce

warfelg said:
Very much agreed. I thought they would have done something much cooler with this space too. I got to wonder if they are keeping the Fear Factor stage as some sort of Diagon Ally expansion (Ministry of Magic Ride anyone?).
Click to expand...

HMMMM.,,The word is that MoM is gonna be at EU for the Fantastic Beast area set in Paris, which that area is largely enclosed, so not sure they want to confuse some park guest with 2 MoM. Although, I would rather it take the over the Fear Factor stage, and have it set in London area.
Some general park goers don't even know that there are several Ministry of Magic, so don't confuse them I guess is what WB, Uni, want to do, but however if they change it up to take the FF area I would like it much better, so I agree with you @warfelg

However guess they want to take advantage of the old Terminator building, why let it sit it empty any longer than it has. Plus they are doing a lot of touch up in both parks, and to have another show probably around Spring Break time to eat up some of the people. Besides Bourne, and something probably little before the JP coaster, after that probably very minot stuff at both parks since UEU will be the next big thing,
Reactions: belsaas, Zachary and Nicole

At least they're putting something in that building. That Hollywood-themed area of the park is one of the most charming and enjoyable strips at USO, but without any sort of attraction nearby, there's no real draw to go there. At least this'll give guests (and myself) an incentive to enjoy the scenery in that neglected front corner of the park.
Reactions: Zachary

Excuse u the Horror and Make-up show is right there. What else do people need?
Reactions: netdvn, belsaas, Eric and 2 others

Does the makeup show still feature the Tom Cruise Mummy? If so, that’s not something guests want to see if the movie numbers are any indication.

A glimpse at what is in store... 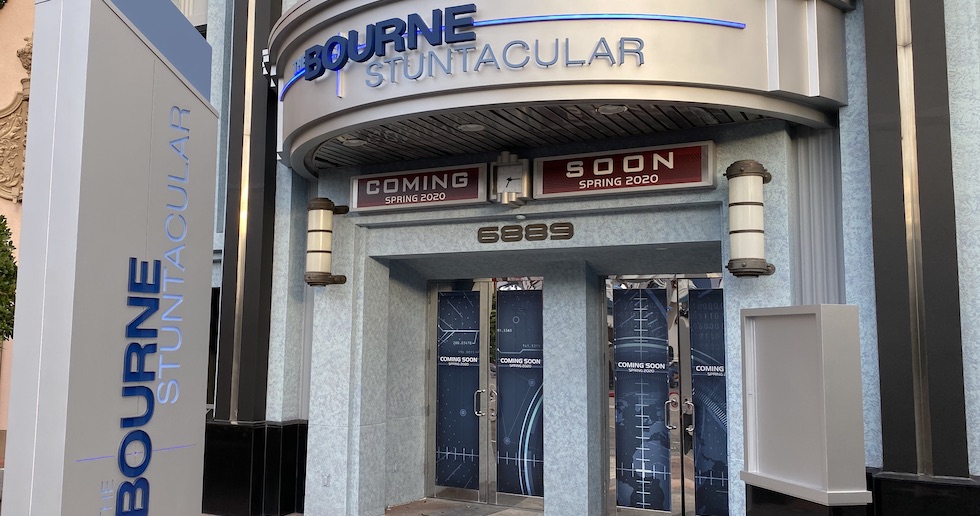 'Today Show' offers a look inside The Bourne Stuntacular