Wow I can't believe this got confurmed ?

On a much more serious note, this is really curious information as this could mean anything; could Festa be rebranded to an entirely new hamlet? Given an update like Oktoberfest? Could both the italy hamlets be unified? Or maybe a new hamlet would be added and this Project is just one piece in the grand scheme of everything. It's hard to say one thing or another is concrete for now, but It's something to get you thinking.
Reactions: DolphinzRock, Logang, scottyholiday and 4 others

This is just a speculative view, but I personally think this will be a sub area for the new coaster along with a shop, and potentially a flat ride. Similar to how the story of Griffon takes place in the more rural country away from Aquitaine I could see them theme this area to tie into to Festa, Italy, or even Spain as rumored. Looking at some of SEAS more recent coasters like Mako, InvadR, and Cobra’s Curse show that their major coasters all found in sub areas pertaining to their hamlet.

Maybe since height is relative and is a tool fabricated by the government to oppress us, the attraction will be 300ft underground ?
Reactions: DolphinzRock, Zimmy and Sly4Good

By permission of @Zachary... made possible by major contributions in sleuthing and subject expertise from @kingadam, @warfelg, and @Celticdog...

Here is some information about a very official looking document which recently came to the attention of ParkFans.

The doc in question is an application on BGW's behalf, for authorization/clearance from a resource management and conservation angle (just one regulatory step among many, to be clear). It dates from fall 2017. Current status of any planning around it is, of course, unknown.

First, let's get these two snippets out of the way, both from the document. Posted without comment: 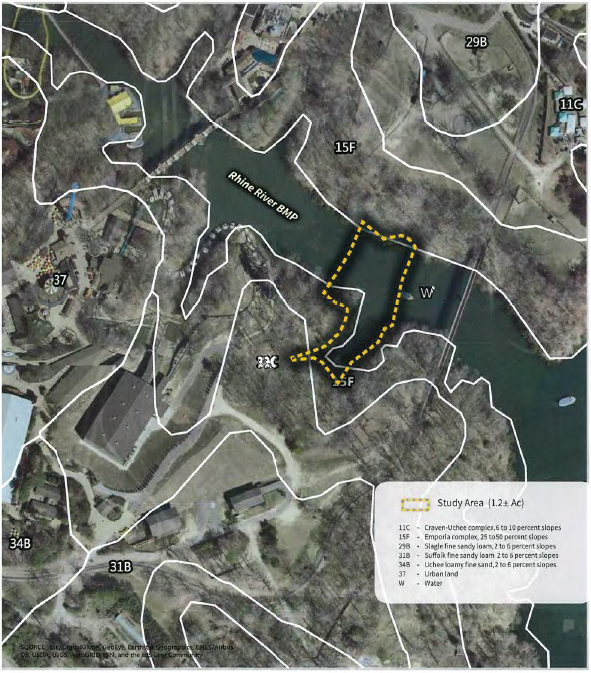 That's the Festhaus and Oktoberfest on the left, the Verbolten-San Marco bridge in the upper left, and a corner of Festa Italia in the extreme upper right. The open space in the upper right is Festa Field, the currently rumored site of Project Madrid. The open space at the bottom with a few lone structures in it is Festhaus Park, former site of Drachen Fire. The yellow study area in the middle is the proposed work area. A keen eye will note that this study area spans the entire breadth of the Rhine, shore to shore, between those two large, open land areas.

Below is what has been indicated in that study area. White callouts below are original in the document and refer to other detailed views provided as part of the park's application. Orange callouts were added after reviewing the document, so they are not original; they refer to what we believe each noted feature in the diagram represents, based on text in the document. 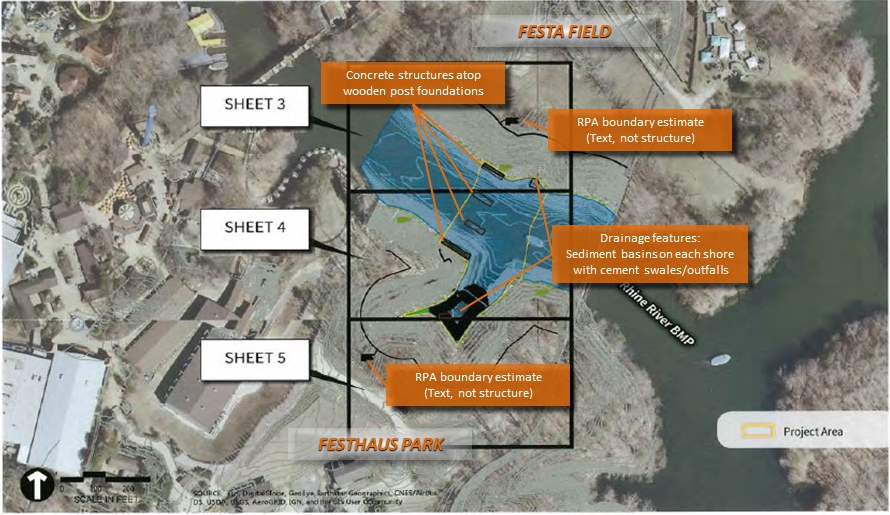 That particularly large square-ish structure on the south side of the Rhine is a large dredged sediment capture basin, intended to provide controlled drainage not only for water runoff, but also for noteworthy quantities of sediment washed downhill during "runoff events," e.g. rainstorms. It seems the magnitude of the sediment containment challenge is lighter on the north bank, where a much smaller drainage basin appears as a small indicated feature.

Of particular interest is the sequence of rectangular structures across the breadth of the Rhine. These are described as concrete cap structures sitting atop wood pilings. There is plenty of obvious opportunity for speculation here, and more than one possible interpretation of the structures' purpose. But the document quite deliberately avoids noting any specifics about these structures' intended use. And it overtly states that it is keeping those specifics confidential. So, to keep this particular post mostly confined to a description of what the document actually describes -- despite some active and ongoing sidebar conversations -- I'll let the speculation about these structures come from others for now.

Just to reiterate: None of the above is definitively known to be happening at this time. Designs can change, budgets can change, priorities can change... the info here represents our most reasonable interpretation of a single document which dates from over a year ago. This is a good time to extend a double-barrel disclaimer: caveat emptor and you get what you pay for.
Reactions: jornor, SukaUniFl, DolphinzRock and 21 others

Some additional detail, stitched together from pages of the application...

Reactions: jornor, Adam, snowman6996 and 4 others

So wait there is another attraction coming in this expansion?

The layout and description of the structures looks and sounds like bridge pilings to me. Maybe we are looking another Rhine crossing that would link the old DF sight with the planned Madrid location. Wood pilings don't sound coaster related to me.
Reactions: CastleOSullivan and b.mac

Impact Areas 1, 3, 4, and 5 basically specifically imply that a bridge or some sort of crossing over the Rhine is being built. For what I don't know.

madmax said:
So wait there is another attraction coming in this expansion?
Click to expand...

There's no indication in the documents the point to an attraction. Everything talked about stays within the boundary of the water. It seems as though its a plan for 4 footers, and a developed way to continually keep the Rhine clear of runoff through dredging every 5 years. Take away what you will about the park needing to continually dredge and area they didn't need to do that with before.
Reactions: thopping

madmax said:
I doubt the coaster is gonna cross the Rhine so yeah this sounds like another bridge and something possibly going in that Festhaus area
Click to expand...

Or Madridbot's plans were right all a long. Not saying that is what I personally think is going on but just feel like someone needs to say it.

Based on what I have seen, in my opinion there is absolutely no way these structures would or even could serve as foundation work for an amusement ride.
Reactions: Jesy, Adam, Zimmy and 7 others

Impact Area 2 is the drainage basin that was featured in the previous planning documents featuring what I would assume was the footer placements. They match pretty much spot on but I'm no good at photoshop.

There is no way they would use wood topped with concrete footers for a roller coaster.
Reactions: DolphinzRock and LudwigII

Thomas said:
There is no way they would use wood topped with concrete footers for a roller coaster.
Click to expand...

Correct but there is quite the varying uses for such a structure.