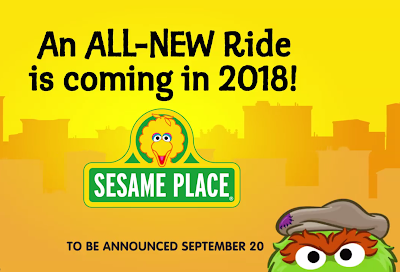 Sesame Place, located in Langhorne, PA, posted a teaser today on social media about an upcoming announcement for a new ride opening in 2018.  The teaser hasn't said just what kind of ride, but does promise that it will be the park's "biggest, grouchiest" ride yet.  Oscar the Grouch does appear at the very end of the video, seen above, so I'm sure it's a safe bet to say that it will be themed around him.

The other hints in the video come from the text that appears, including "get ready to BUCKLE UP... and hold on TIGHT!"  The text then zooms off the screen, leaving a trail of what looks like exhaust as a car horn beeps.

So... we have the "biggest" ride the park has done yet, if I'm taking that on face value correctly, which means larger than Vapor Trail, a custom family Vekoma coaster added back in 1998.  That ride is actually pretty big for a children's coaster, 1,300 feet long with an elevation change of 56 feet.  Some parts of the hint do make me think that this will be a coaster, but you never know.  If it is, and it's larger than Vapor Trail, then I will be quite impressed.

Another way to go with this would be to focus on the car themes that can be picked up.  Perhaps it will be some sort of junior driving attraction, perhaps even along the lines of the ones at the Legoland parks?  They are pretty big, but not really something that I would start to market as the biggest the park has done.  Not enough bang for the buck on that one, to me at least.

Perhaps we will have additional clues leading up to the September 20th announcement, revealing more about the 2018 expansion.

One other note about the park that I found interesting, the web address for the park's site:


https://sesameplace.com/philadelphia/​
We know that SeaWorld Entertainment is planning a 2nd Sesame Place park to open by 2021, and from the last earnings call it seems they already picked a location.  It seems from the way the company has made the web address that they're gearing up to reveal that soon, with another market listed in the directory replacing Philadelphia.  Can't wait to see where the next park will go!
Click to expand...


Teaser Video is available for viewing at NewsPlusNotes.com or on Sesame Place's Facebook page.
Reactions: wombat96, phurst, tursiops and 5 others

My confidence level here is about 90% so don't hunt me down with pitchforks and torches if something has changed since I received this information.

From what I can tell, the attraction being referenced by Sesame Place will be InvadR's new sister coaster. I know with 100% certainty that there was (relatively recently) a GCI wooden coaster themed to Oscar the Grouch planned for a SeaWorld Parks location. I'm pretty confident that the coaster in question is the exact project being teased by Sesame Place right now.

If this comes to pass, it seems like a really big deal. If we are talking about a ride in the same league as White Lighting or InvadR, it could have the ability to put Sesame Place on the map and, potentially, move it into the same top-tier family park category as Idlewild, Gilroy Gardens, and the LEGOLAND parks.

Maybe this finally answers the long standing question: "What happened to the rest of Gwazi's Millennium Flyer trains?"
Reactions: netdvn, Jesy, Shane and 9 others

Oscar's Wacky Taxi has been announced! I got the manufacturer wrong (outdated information), but it is, in fact, a wooden family coaster! Also, it happens to have the cutest POV in history.

It's very interesting to see GravityGroup take this project. That said, no complaints from me, the layout looks splendid! Plus, is there anything out there that could be more perfect for this park? I sorta think not...
Reactions: violetfemme, Unagi, Mushroom and 4 others

This looks pretty sweet for a family coaster looks like an upgraded wooden warrior tbh. this kinda makes me wanna visit the park now!

Very much surprised by Gravity Group as well, though I don't know that the left over parts from Gwazi that Invadr used would have been puto to work here since GCI actually makes mini-Millennium Fliers (LEGOland Florida). I still was not expecting another tiny Gravity Group creation.

Zachary said:
Oscar's Wacky Taxi has been announced! I got the manufacturer wrong (outdated information), but it is, in fact, a wooden family coaster! Also, it happens to have the cutest POV in history.

It's very interesting to see GravityGroup take this project. That said, no complaints from me, the layout looks splendid! Plus, is there anything out there that could be more perfect for this park? I sorta think not...
Click to expand...

The question is whether or not it will be as fun as El Toro.
Reactions: Unagi

I just want onboard audio for the 'boing' sound effects for the airtime hills.
Reactions: CastleOSullivan, Shane, Youhow2 and 2 others

I have not read this anywhere else, but NewsPlusNotes.com has indicated that the ride will have a completely steel structure (like Invadr at BGW) painted "Sesame Street Green" and wooden track painted yellow. It would appear that SEAS is not taking any chances with their wood ride structures after Gwazi's ill-fate.
Reactions: Zachary and Nicole

Sesame Place tweeted an image of Oscar's Wacky Taxi last week.
[tweet=https://twitter.com/SesamePlace/status/963435762153934848/photo/1]
As you can see from the photo the ride is almost complete. This Gravity Group creation has a compact layout that fits nicely into the park and entirley within the frame of one photo! As NewsPlusNotes pointed out, this is the only wooden coaster project in the US for 2018. The painted steel supports look great, and if the chatter of the wood track getting yellow paint is true, this will be a uniquely Sesame Street coaster that should be fun for all ages.
Reactions: Jesy, Unagi, lightninlady and 1 other person

I can't possibly overstate how much I love the green structure. (And hey, the layout looks great too!)
Reactions: CastleOSullivan, wombat96, lightninlady and 2 others

Zachary has a CoasterCrush.
Reactions: Zimmy

Oscar is my favorite Sesame Character! I love this!!!! :heart::heart:

But im sure he would hate it lol

I love Oscar, too!
Reactions: Zimmy and Peej1212

I understand Oscar. I worry about Cookie. Moms Against Fun are trying to kill him.
Reactions: Nicole and Peej1212
P

I bet they even want to make him eat vegan cookies now. THERE IS NO JUSTICE!
Reactions: Peej1212
P