I got the fun tracker in the mail and it had this. 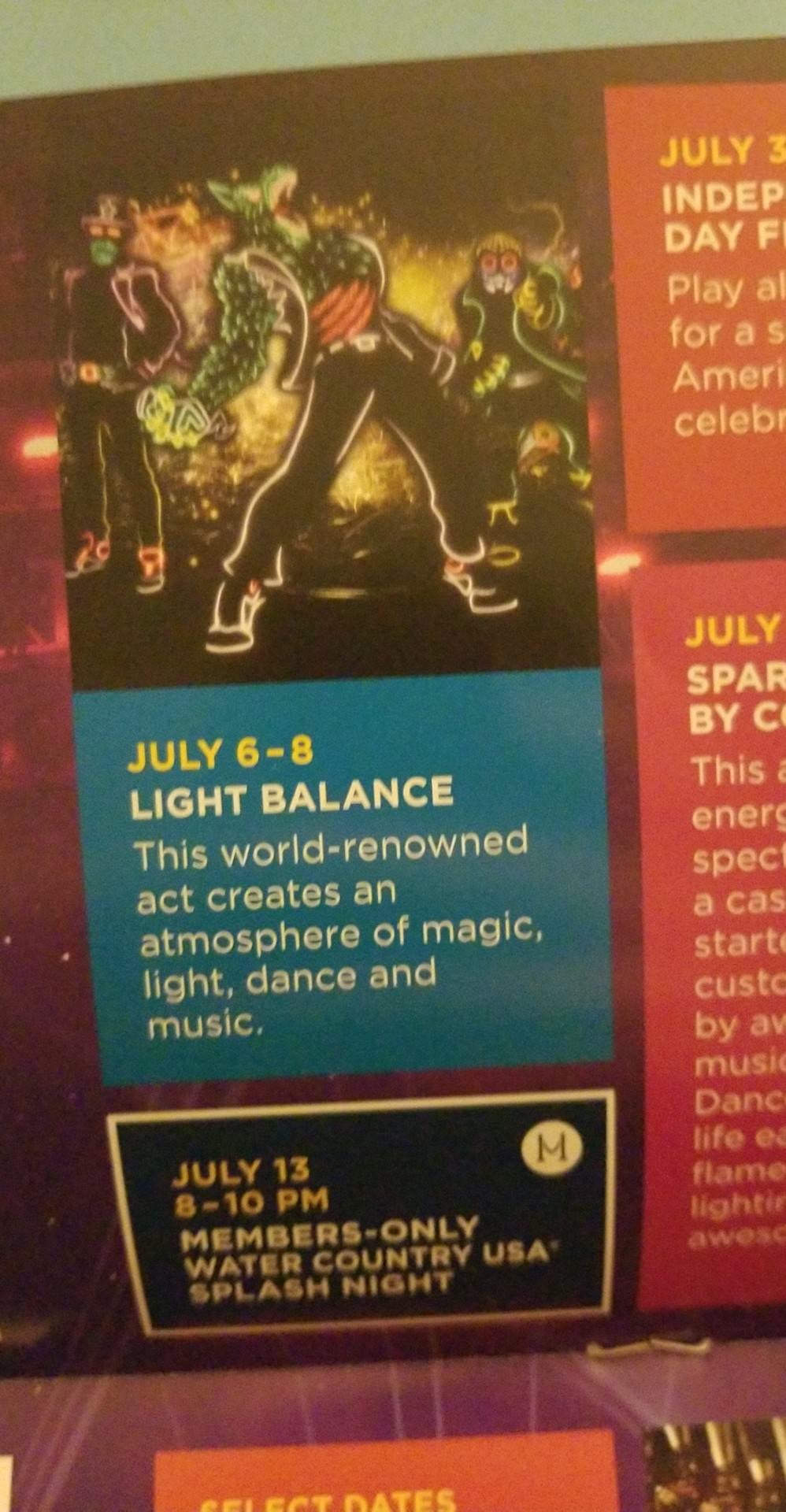 Reactions: jornor, Alf33, wombat96 and 4 others

According to BGW's Facebook Event page, Light Balance will also be at the park on Weekends July 27 - August 12. The website hasn't been updated though. Really want to see the show (my kids love AGT) but didn't want to head down there this weekend.
Reactions: jornor, Alf33 and Zachary
T

Pretty cool show! Only 12 minutes, but very high paced. Met them all quickly in the Fest Haus before the show, nice people.

Does anyone know if all shows are identical? Or if it will be any different when they return next month?
Reactions: jornor and sotomexx
S

Show was really good but as mentioned only 12 minutes long. The show was all blackout except for 1 blue light shinning in my eyes the entire show. I could see the stage hands in all black because of the blue stage light. They didn't have a guy dressed as the wolf as advertised on all the images released by the park. Half of the show was the same routine that was done during America's Got Talent. That's not a bad thing. The show was amazingly fast paced. Also the reserved seats were not all the way up front. They started at about the center 4th or 5th row. The 6:45 show tonight was completely packed. The door was shut about 5 minutes before show time.
Reactions: jornor, Alf33 and CastleOSullivan

How did they have the theater set up? I will be there on Sunday, but I'm curious as to how they transition from Celtic Fyre to Light Balance.
Reactions: jornor and VikingvadR

From what I could tell (it was dark so it was hard to see) it looked like it was just an all black curtain dropped down from the ceiling just in front of the Celtic Fyre bar and that was pretty much it. The decorations above the fireplace including the swords and everything were still there on the wall, but all the other props were moved backstage.
Reactions: Alf33 and Lord Robert
T

Caught the show twice last night. The best seats to preserve the illusion would be in the exact center of the center rear section of seats. There are dim lights on the aisles, and the costumes themselves give off light. If you are up front, you can see the actors and the illusion is somewhat lessened. At one show I sat on the centerline, and in the next I sat on the outside of the aisle. On the centerline gives a much better experience.
Reactions: jornor, Zachary, Alf33 and 3 others
S

Today they were handing out tickets to people in line. The line stretched almost to the France railroad crossing. They just have a black drape curtain to hide Celtic Fyre set. The center is definitely the better seats. On the sides you can see the stage extras and actors when not lit. The Exit signs on the wall put out alot of light therefore the theater isn't exactly blackout. I just wish the show was a tad longer than 12 minutes, even an extra 3 minutes.
Reactions: jornor

While walking into the AST, the usher outside kept yelling "No phones! Keep them in your pockets at all times!" I saw another person later in the day saying the same thing. I can understand why this is a big no-no for this show in particular, but it felt a bit out of place at Busch Gardens, even in Williamsburg. Once the show started, the lights went off and a similar "no phones of any sort" announcement was read via a microphone. They need to get a professional recording of that speech ASAP. I felt like I ruined someone's day by being a guest in the AST because of that announcement. Lol

The show had a lot of light leakage, which I can forgive, given the bright set of Celtic Fyre in the foreground. What I didn't like was the lack of variation in choreography and costumes. I feel like I saw the entire show after the first three-minute number, which was the best part. I am glad that they decided to make it short, but it still felt too long for me. I might have felt different if I expected a much longer show, but I could have gone with, maybe, 8 minutes.

Overall, I'm glad I wasn't too hyped for this show. I think watching them on AGT can be a bad thing if you expect it to be anything like that. Otherwise, I think the videos can help in preparing for disappointment. It's the same acts, but with little to no costume variation. 5 out of 10.

I enjoyed every second of watching this performance two times on Sunday. It was high energy and truly unique to them. We had purchased the reserved seating for the 6:45 show, had no direction (we actually ended up sitting in the front row and being upset they were not checking to see if anyone had paid for reserved, we later realized we weren't even sitting in the "reserved" section...) But i'm glad we sat in the front as there was little to no light distractions and definitely no phone distractions from other guests. We went back and saw the 9:45 show as we were leaving the park and had that infamous blue light staring in our faces the whole time (i understand the necessity of it but i would've enjoyed a much darker experience).

The only disappointment I had was no "curtain call". We really looked froward to having them bow or something and seeing them with the lights on, I'm sure this ruins some of the magic but as a theater geek I was really hoping to sneak a peek.
Reactions: Zachary, DJTLG, Alf33 and 3 others

I caught the 7:45 show on Saturday. They were giving out tickets so you could be guaranteed a seat even if you left to go do other things for a bit. Even still I waited in line a little over an hour. I enjoyed the show and definitely agree that center is the best as I was in the back row and light leakage wasn't a problem and I could barely see any stage hands or the actors when their lights were out. I agree with COS that after about the first five minutes of the show you've seen most of what they do until the lady comes out. The 12 min run time was about perfect. Anymore and they would need to start doing other moves to change things up.

This kind of show is a bit like Blue Man Group in that it depends on anonymity. The cast are supposed to unidentifiable and completely interchangeable. Like Blue Man Group, the only curtain call they would stage would be completely in character (near enough faceless) and would not be a typical musical style call.

In straight shows this has a precedence. For example, often when staging "The Diary of Anne Frank," there is not a curtain call. Often there is just a voice over of her father detailing the eventual disposition of the family. (spoiler, it not good) Frankly, I think given the subject matter, that is the best way to handle it.

Incidentally if you ever get to go backstage after a Blue Man Group for a meet and greet, you will find that they stay completely in character and paint.
Reactions: Jesy, Nicole and CastleOSullivan

Just watched light balance. There was a curtain call this time and the sides of the stage has black curtains as well now
Reactions: jornor, luseendesi, CastleOSullivan and 1 other person

Are the curtains on the stage itself (the legs) or in the house (audience) in front of the fireplace and the other side?
Reactions: jornor

CastleOSullivan said:
Are the curtains on the stage itself (the legs) or in the house (audience) in front of the fireplace and the other side?
Click to expand...

The curtains are in front of the fireplace and where the entrance on the other side besides in the middle. Much better.
Reactions: jornor, Eric, Zachary and 1 other person
You must log in or register to reply here.
Share:
Facebook Twitter Reddit Email Share Link
Consider Donating to Hide This Ad