As far as I can tell this is a legitimate suit but I can not figure out how in the world it could be possibly have happened so I doubt that it's true. 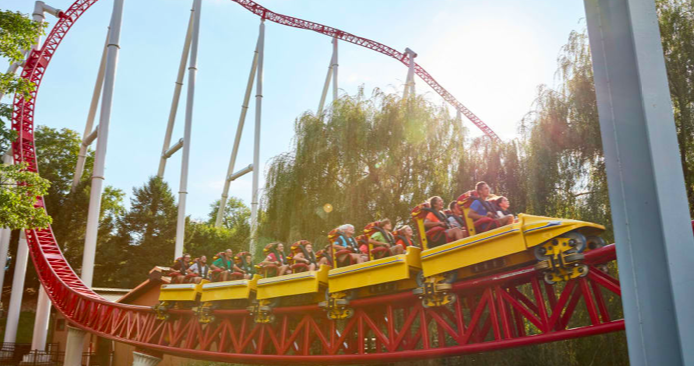 horsesboy said:
As far as I can tell this is a legitimate suit but I can not figure out how in the world it could be possibly have happened so I doubt that it's true.

I will be quite interested of the details, if they ever are revealed publicly, of this case. I do not see a scenario where a guest "jumps out of the train" AND the launch is not aborted. Again without details, the article seems to imply the father experienced the entire ride without assistance, all the while the seat next to him had unlocked restraints. It seems unfathomable that a guest "jumping off a ride" did not produce an e-stop, along with an investigation by the park and manufacturer.

It is also interesting that the article seems to imply Stormrunner being closed this Summer is relevant to the lawsuit.
Reactions: horsesboy, DECoasteyGuy, Dombot and 1 other person

I smell BS on this one - unless I'm mistaken, aren't all harnesses in the same row locked together, if not in each car?

So as long as the dad was locked in, the son should have been somewhat secured to the point the son couldn't have gotten out of the restraints without doing some serious wiggling... Which means to me that the guests were negligent in their own safety if that was the case.

Additionally, assuming the restraint was somehow locked wide open - wouldn't the ride computer spot that and not allow dispatch before an op could even do anything?
Reactions: horsesboy, Mushroom, AlpenChariot and 2 others

Yeah, to me this just sounds like a helicopter dad trying to get some free attention for "looking after" his son. There's no way something like this would ever happen, automatic e-stops would prevent a car from moving out of the station with an open restraint.
Reactions: horsesboy and AlpenChariot

The entire story raises questions, Storm Runner is a slightly older Intamin but I'm pretty sure that it still has to have all restraints locked before leaving the station. Also isn't there a curtain laser on the walkway on each side of the station that E-stops the ride when the laser is crossed?
Reactions: horsesboy, Jonesta6 and Dombot

It was rather uncommon for coasters prior to 2005 to have minimum down restraints that prevented a dispatch if restraints are up.

After Kingda Ka was built it became more common and more rides were retrofitted with that technology.

Similar descriptive incidents happened in the past, most notably Shockwave at Kings Dominion where a rider squeezed out of their restraint and climbed down the lift as the train was ascending.

At a lot of rides an incident like this can still happen, and I do not doubt something of similarity to what was stated happened but I doubt the full validity of the litigator's claims.

On another forum I'm on, there is an HP employee who says that immediately after the incident, Hershey Park changed it so that only lead operators could work on Storm Runner for the rest of that season, and to this day only lead operators are allowed to operate the panel. Also after the end of that season they added restraint locked lights. Now it may well be the case that the incident got blown up in the father's eyes to something more than it really was, but it was enough of a concern to HP that they made those changes.
Reactions: Mr. Mastodon Farm, horsesboy, Dombot and 2 others

It isn't a lead-only operated ride anymore since I operated it multiple times last year.
But yeah it did get a safety system update in 2019 which was why it had the delayed opening.

b.mac said:
It was rather uncommon for coasters prior to 2005 to have minimum down restraints that prevented a dispatch if restraints are up.
Click to expand...

Clearly, Apollo was one of them, having been installed with the ride in '99. Alpie was fitted with them sometime, I think 2010, but I could be wrong. Either way, has them now. LNM still doesn't to my knowledge.

The more I think on this incident, the more I realize that it is quite possible it happened. Now I doubt that this guy will get very much, in the words of Jeremy Jam, "I'm not, not going to get nothing," since he is trying to prove potential injury. By that logic, I would sue every driver that cut me off in Chicago claiming that I could have died. Anyways, things like this very much do happen (I can point to a specific example with MT and a team member, but that's a story for another time), where safety systems are not idiot proof. In safety system design, not only do you have to make it idiot proof, but also litigation proof. The only way that someone can get injured is when they themselves defeat the safety system. For example, there is a small press on an assembly line. In order to avoid workers from being able to crush their fingers under the press, there are light curtains, a two-hand start (two finger presences, spaced apart to require the operator to have both hands on it to start the press), and an e-stop. If a worker was somehow able to rewire one of those safety features, someone could get hurt, but because it was not designed that way, the engineers responsible for that press are not liable, rather the person (or company) that rewired it would be. If the design was flawed from the beginning, say the light curtain was not wired correctly in the prints, nor tested correctly for function, the design staff would be liable. In the case of Hershey, whoever made the design choice to not include harness prox switches, which was probably the HP design staff, would be at least partially liable if an incident occurred, being only shielded by the SOP which was not followed. These cases usually don't just fall on one individual, in this case, the ride operators and will probably stay more after the park, who made a choice that was not necessarily following the state of the art safety practices of early 2000's ride design.

Having been a ride operator, I can say that if the events occurred exactly as the articles are reporting, this is really bad for the staff at the ride. I mean, really?! How do you miss a harness sticking up in the air on a ride where nothing is obstructing the view of the operators? I will be interested in what HP presents in defense of this as this just seems too illogical to have happened this way.
Last edited: Jul 9, 2020

If this happened as stated, it’s not the actual damages that would be much, but the punitive damages could be a lot to deter future incidents.

It's already stated in this thread Hershey took measures to make sure an incident of this description wouldn't happen again.

In my experience, things like this cause drastic changes pretty fast. If something like this happened at LNM, I know that the park would shut down the ride until a harness check system was in place.

ControlsEE said:
Having been a ride operator, I can say that if the events occurred exactly as the articles are reporting, this is really bad for the staff at the ride. I mean, really?! How do you miss a harness sticking up in the air on a ride where nothing is obstructing the view of the operators? I will be interested in what HP presents in defense of this as this just seems too illogical to have happened this way.
Click to expand...

One note... the dad claims the harness "could not be secured," which leaves open a variety of possibilities for what exactly happened.

The kid was 9 years old and just tall enough to ride for the first time, so (e.g.) he might have been able to squirm out from beneath a U-bar that was not down far enough to hold him in, and which he couldn't lower more on his own at that point. That condition should still be highly visible to operators, but it would look different from a fully open restraint.

I'll be the first to admit it's hard to imagine that scenario, given the seat and restraint config on Storm Runner. Still... none of the other possibilities I can think of should happen either. So to my mind, the most likely possibilities are a question of (1) what is physically possible at all, and then (2) which of those could happen not only if the ride op team were completely negligent, but also if the ride op team collectively were a little bit diligent. Emphasis little.

This is all speculation. Come back and ridicule it when the situation turns out to have been completely different from any of this.

It's a great credit to both the ride design and ride operating worlds that there are so few genuinely safety-threatening incidents. From a tech standpoint I'll just say I'm a big fan of sensor-based harness position verification for dispatch... should a sensor fail, it generally prevents dispatch, whereas relying on "let the ride op visually scan the critical life-saving devices" does not offer the same added layer of safety. Of course using both is better still IMO...
Reactions: Mushroom, CastleOSullivan, Dombot and 3 others
You must log in or register to reply here.
Share:
Facebook Twitter Reddit Email Share Link
Consider Donating to Hide This Ad