Universal Studios Hollywood tweeted today that Jurassic Park: The Ride will close this fall to be re-imagined as a Jurassic World-themed ride opening in 2019.

The new ride's description, as seen here, makes me wonder if it will just be the same flume ride with a more modern theme:


Universal Studios Hollywood said:
“This next-generation thrill ride will be a fully reimagined iteration of the groundbreaking adventure, elevating every facet of the experience,” a press release says of the new attraction, called “Jurassic World Ride.” “With the introduction of never-before-seen dinosaurs, enhanced storytelling, lush scenic design, an entirely new color scheme, and uncompromised state-of-the-art technology, the ride will capture elements never experienced within a theme park.”
Click to expand...

Also, as pure speculation, I noticed that Universal Studios Florida commented in a thread about Jurassic Park River Adventure that "No announcement about changes to Jurassic Park: River Adventure have been announced for us." This makes me wonder if a similar Jurassic World update is in the works at IOA as well.
Reactions: CastleOSullivan, wombat96 and Nicole

So, essentially this is Jurassic Park: Director's Cut (With Extra Dinosaurs)? That's sure to be a hit.

Seriously though, the ultrasaurus at the beginning of the ride, while he is impressive at full height (though you never see him that way), he needs a chiropractor. Lol. His neck has looked awkwardly curved since the ride made its debut, due to the weight it carries for his one purpose.

I think the ride would be amazing with a proper update. It's still pretty exceptional, even by Universal's standards.

Also, a fun fact: The composer and sound designer for the ride and surrounding area is none other than Gary Guttman, who wrote the score for both The Enchanted Laboratory and Secrets of Castle O'Sullivan at Busch Gardens Williamsburg.

Next time you watch Secrets of COS on YouTube (available on my channel and a few others), remember that fun fact when you are listening to the musical part accompanying the grand reveal of the fairy world. Good luck trying not to think about dinosaurs. ;-)
Reactions: Mushroom and luseendesi

Joe said:
Also, as pure speculation, I noticed that Universal Studios Florida commented in a thread about Jurassic Park River Adventure that "No announcement about  changes to Jurassic Park: River Adventure have been announced for us." This makes me wonder if a similar Jurassic World update is in the works at IOA as well.
Click to expand...

I'm not sure how true this is, but the rumor is that Jurassic World is supposedly being saved for the new third gate with this being one of the headline IP's. This could be false although with another hundred acres being purchased in April I wouldn't be terribly surprised if a Jurassic World attraction is in the works, just on delay due to the newly added land. Knowing that Universal Beijing will have a Jurassic World area with a new attraction and the companies love for cloning that it could come to this new third gate in Orlando.

On the contrary, markings have appeared on Pteranodon Flyers leading many to believe a new attraction is on the way in that area. Maybe Hollywood is a test project and based on the success of the new movie we could see River Adventure in Orlando being updated along with a new attraction and re-branding the area from Jurassic Park to Jurassic World?
Reactions: Mushroom

My biggest fear is that the amazing animatronic dinos. Some of them are aged, yes. Some it them are still hold up well though. Uni's nasty habit of screens really can't work with water rides.
Reactions: Mushroom and CastleOSullivan

I still wonder what Universal will do with these massive lands when the IPs become outdated. Could you imagine the mess we might have today if ET had an entire land created around it? Then again, I guess Amity Island was a thing with Jaws, but that could just as easily have been decor at a Six Flags due to the simplicity.
Reactions: UncleDuncan

From what I've gotten from a few uhhhhh, people, I know, I'm confident in saying that there will be a new major Jurassic World attraction in Orlando. I'm also fairly certain that it will be something quite different from what Hollywood is getting. I don't want to start unfounded rumors though so I won't mention anything else. Also, for what it's worth, consider this a rumor.

From Reddit. They're adding a large Indominous Rex animatronic that's going to fight Rexxy. Props for them not using screens. 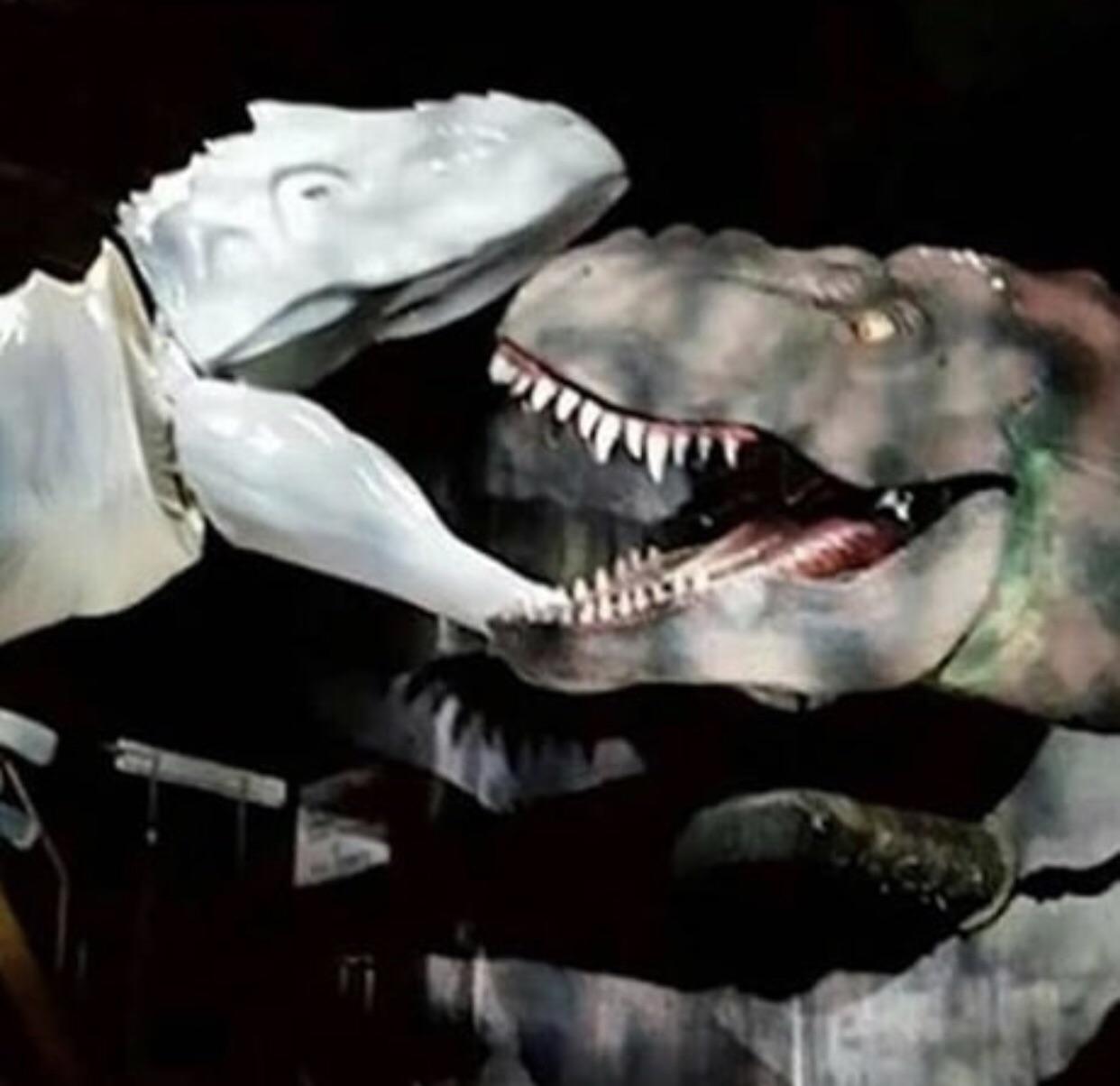 Here is the BLUE Raptor Encounter we had while at Universal Hollywood, Thanks to SaraJunson for the pic. As far as Uni Orlando they are just doing a refurb of JPRA, however where TricertopTrikes is there is walls going up and Rumored 2020 there will be a coaster in JP, which will probably change to JW, since the Michael Creigton IP will be ending, so of course change to JW in Orlando as well. The Blue Raptor Encounter at Orlando is so much better, but Blue is beatiful
Reactions: Zachary
?

At risk of being off topic, I wouldn't necessarily expect a coaster in Orlando.

sunchild said:
At risk of being off topic, I wouldn't necessarily expect a coaster in Orlando.
Click to expand...

As far as it has still been rumored Jurassic Park in IOA will be getting a Jurassic Coaster, and rumored to be another Intamin and similar to TARON. Uni Hollywood's Jurassic World overhaul is looking like the first lagoon area will be an enclosed show house, as from recent pics lots more metal framing work has gone vertical.

Its kind of weird to think that we might be getting two intamin coasters in a short amount of time, in the same park, just one land from each other. Also, having just been on Jurassic Park River Adventure, I hope it doesnt become Jurassic World, it is still in pretty good shape.
Reactions: SukaUniFl

Eric said:
Its kind of weird to think that we might be getting two intamin coasters in a short amount of time, in the same park, just one land from each other. Also, having just been on Jurassic Park River Adventure, I hope it doesnt become Jurassic World, it is still in pretty good shape.
Click to expand...

Yeah JPRA here at IOA may be only getting a refurb. So far NO on Jurassic World redo in Orlando. Also, now hearing that JW will not be a new land area at the new Universal Orlando Resorts South area. However, have heard may be a ride or small area for JW, but seems like it is not its own land now. But of course until Uni makes the Official announcements, its just chalked up to Rumor. Although there has been a patent put forth for a gyrosphere ride, not sure but thinking that is for the new Universal in Beijing to be open in 2020 or so for the Olympics.

I hope they keep JW separate from JP at IOA. I prefer the look of the original JP to the new JW.

They also need something like Hogwarts Express but with dinos for the two parks.
Reactions: Mushroom, wombat96 and SukaUniFl
W

Pretzel Kaiser said:
I hope they keep JW separate from JP at IOA. I prefer the look of the original JP to the new JW.

They also need something like Hogwarts Express but with dinos for the two parks.
Click to expand...

The two parks are going to be a bit far apart for something like that.

I personally would like to see JP updated to JW.

My personal twist:
Change the boat ride to JW, and in the JP pavilion, put a dark ride/year round escape room. Make it look like the ruins from JW, theme escape rooms to different experiences.

I say this because technology based areas in theme parks age FAST. When that main JP pavilion opened it looked state of the art. I went 5 years after it opened and it looked horrible already from a technology usage standpoint.

Pretzel Kaiser said:
I hope they keep JW separate from JP at IOA. I prefer the look of the original JP to the new JW.

They also need something like Hogwarts Express but with dinos for the two parks.
Click to expand...

Same here plus JP is pretty much fits with all of the islands at IOA, unlike at Studios, IOA is based on books. Marvel Island-comic books, WWHP JKRowling books, etc. Yeah I believe they are gonna keep JP as the book IP. Although, I do hope we get that gyrosphere ride at gate 3 dry park that is gonna be the new park at UOR South (Fantastic Worlds) or whatever they call it. I love walking thru the JP area even when I go to just go walk around and get my miles in on Fitbit. But, this overhaul is only so far for Hollywood & Japan or may be Singapore. So we are safe so far in Orlando

I don't really think the pavilion could hold anything that significant unless Uni expands the building or knocks it down completely. If anything I'd like to see the exhibits updated or removed for other exhibits.

I love the concept but it really does look horribly outdated by today's standards.
?