You’ll find frozen favorites at Josephine’s Creamery de Chocolat, where hand-dipped ice cream sundaes, topped with our hand-crafted chocolate fudge sauce made with Ghirardelli®, are served in homemade waffle bowls. You can also treat yourself to premium milkshakes, frappes and espresso drinks made with Ghirardelli®, or try a refreshing Minute-Maid fresh fruit smoothie, an ice cream float or a Coca-Cola beverage.
Click to expand...

I'm surprised no one has input their thoughts on this new shop yet, so I suppose I'll start with mine.

I think the shop was an overall fantastic addition. The outside facing the main pathway is pretty awesome, I enjoyed the signage very much, and think it will help bring a large draw to the shop. However, the shrubbery removal in the front of the shop was pretty dissapointing, but I'll talk more about that later in a different thread. I loved the new French Doors, however, I found three of them closely spaced together to be a little excessive, especially when one of them isn't even used. I was also kind of hoping they would put more detail on the walls outside, like they did La Belle, but it still looks good. Going into the shop, I absolutely adored the waffle cone-making display area. It reminded me of the Ristorante Della Piazza Kitchens, and the smokehouse show grill which really shows their devotion to making freshly prepared products for their culinary creations.

The menu design and signage inside the shop was nice, although I felt there could've been more detail put into it. The theming on the walls with posters, like you see out on the main pathways I felt was really nice. The floor tile design was something that really stood out to me and was a fantastic piece of theming, same with the cieling panels. I loved the overall look of the food-preparation area. It looked pretty high-class.

Moving outside to the old seating area, it seemed like nothing was done here. I wanted them to plant some trees on the bordering planter of the seating area to compensate for shade of the areas that the shade structure doesn't cover, but that didn't happen, sadly.

I just had a caramel milk shake, which was pretty decent. The only critiques I would have is that they could probably use higher quality cups to hold drinks, preferably, something with a top on it. Also, that it, and all the dishes in the shop, had a severe lack of cherries. But that was an improvement we suggested to the shop manager when he asked us for our thoughts, so maybe they'll be added soon.

Overall, I really love the new shop, and plan to try out a lot more items from it in the future.
Reactions: Coasternerd, Ambz, MAZ and 6 others

Thanks, Matthew! I'd been wondering about Josephine's.
Reactions: Coasternerd, Zachary and Jrbgwfan06

All I can say is Colossal Carl. France really feels more complete now as it bugged me to walk right past an empty building that was of decent size in the middle of a hamlet. It seems like the park is adding main hubs for all of the stands. For example, if you want pretzels, you know Beste Brezeln und Bier has the most options, if you want ice cream, you know Josephine's Creamery de Chocolat is the place to go. All we need is a main place for pork shanks in New France and I will be content with culinary.
Reactions: Coasternerd and CastleOSullivan

I really enjoyed Josephine's, as well. Although we plan to go back and do a full #ForScience (followed by a massive diet), we did try to taste a variety of items on Saturday. I got the Rocky Road sundae; Zachary tried the Orange Creme shake, and Tony ordered the Pomegranate Berry smoothie.

They were are really good. Even though the ice cream is very high quality, I oddly liked the smoothie the best. That could be because I love that flavor combination and the tartness was spot-on, while the sundae was slightly generic. The waffle cone dish, however, was fantastic. The shake was really well made, but just not my favorite flavor.

The shop looked great, as others have noted. (Pictures here) I noticed a few errors on the menus, but overall I think they did a great job. The staff was excellent, as well. The manager came by looking for input, and was very friendly and responsive, when we had questions.

We all saw things that we want to try in the future, and that may be the best thing about Josephine's: there is a huge variety of excellent desserts and drinks. I anticipate getting something different each time a visit, and enjoying it all.

Overall, I think Culinary knocked this one out of the park.
Reactions: Coasternerd, VACoasterFan, Alf33 and 7 others

Sweet picture Joe of the sign with Griffon in the back ground - great catch.
Look out Luke! #hesgotskilltoo!

So this shop is great. I enjoyed all the ice cream I tried see nicole's note above, and I saw more on the menu I want to try still. My favorite was the freshly made waffle cone dish. It was still softish and tasted fantastic. I really enjoyed it by itself and dipping it in the melted ice cream. YUM YUM!!!

Additionally, one of the best things that have not been mentioned before is the size of the place. You'd think the space is wasted but it was so nice to wait for our ice cream and plenty of room to mingle and not feel like I was in the way. Plus having the ordering station off to the side was nice too.

Since I have not seen any picture in here I link a few to some instagram/twitter accounts until I get the pics of my camera.

I had the Strawberry Short Cake Sunday, it was delightful. As Mathew pointed out it needed a cherry. As I thought the design was spot on, however I do take issue with the back deck. Metal poles, regardless of their purpose sticking out concrete, 18 inches with nothing attached is not attractive. I am well aware that at some point they will have umbrellas but for now they are a dangerous eye sore.

I did enjoy that they left thing around for children to play with and keep occupied as well as a nice play area.
Reactions: Nicole
S

I had the brownie sundae and it was really good. I wish they still had an option for a waffle cone to walk around with. With the waffle bowl its almost like you have to sit down to eat it.
Reactions: Tony, Nicole and Zachary

We were told today no one has ordered the Colossal Carl yet.
Reactions: Zachary and John

They have cherries now too.
Reactions: Coasternerd, Zachary, Zimmy and 1 other person

Zimmy said:
were were told today no one has ordered the Colossal Carl yet.
Click to expand...

Seems about right...everything in there is so expensive. I got the sherbert flavor with stare berries. Ended up costing me upwards of $10.00!

After celebrating my triumphant ride on Grover's Alpine Express this afternoon with my baby, we partook of the Colossal Carl.
Reactions: Coasternerd, Imaginique and Luke

that is a lot of ice cream and you may well have been the first!
Reactions: Luke and chickenking

I would just have trouble saying the name. It's such a bad name. That was a joke I had in my mind already last year.
Anyway, the Blueberry Pomegranate Smoothie was divine. I'm surprised it's not on the regular menu. It's a keeper.
Reactions: Coasternerd, Zachary, Zimmy and 1 other person

I think the Blueberry Pomegranate may be the best thing there. Unfortunately, it was not on the "hard copy" on Preview Day; I just happened to notice it on the flat panel digital menu that day.
Reactions: Coasternerd and Zachary

that place is going to kill me.
Reactions: Alf33, CastleOSullivan, Zachary and 2 others 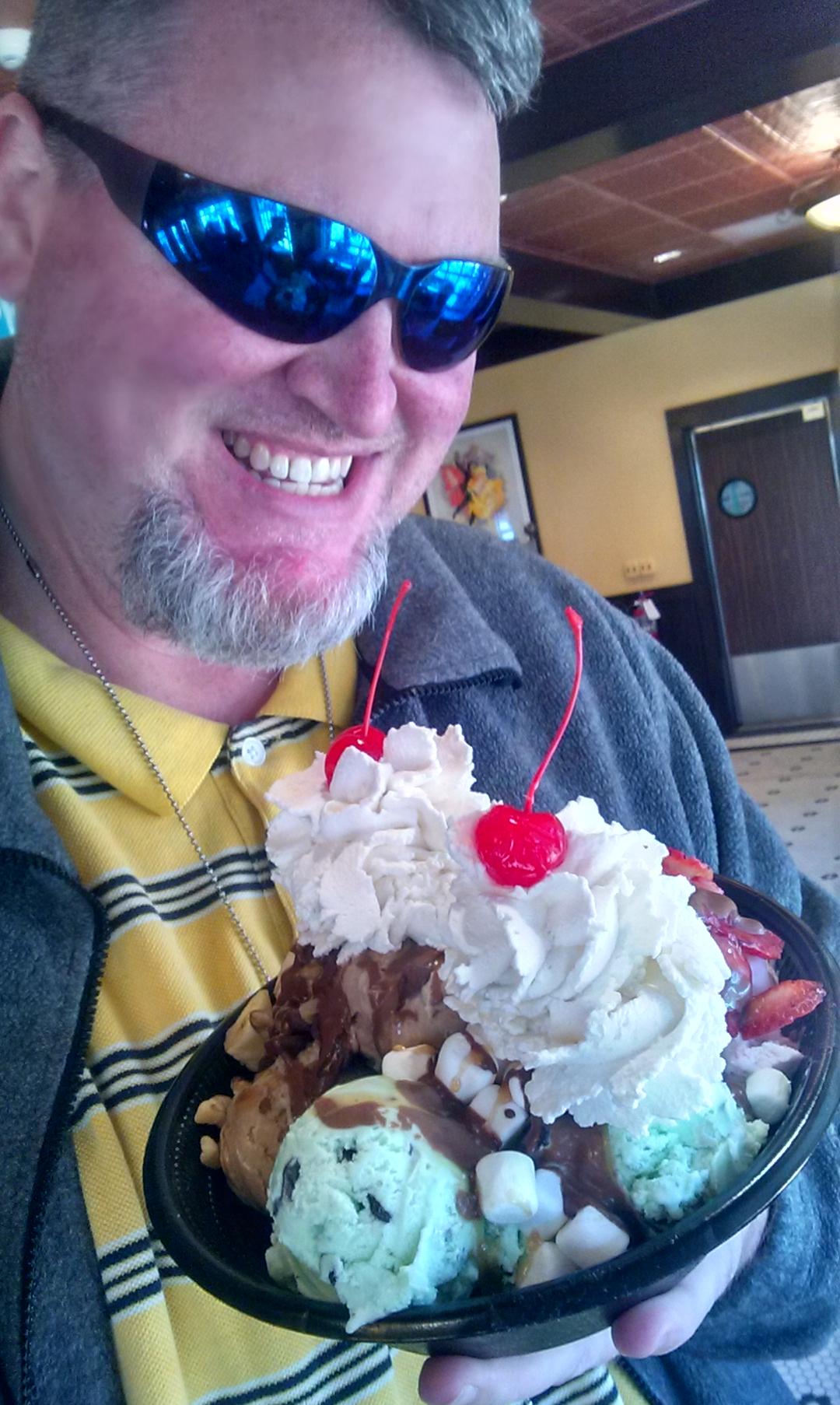 BTW, I walked about 9 miles at the park that day, and was two pounds lighter the next morning. Win!!
Reactions: Coasternerd, VACoasterFan, GeoUSA and 15 others

Is the Colossal Carl Diet a thing now?
Reactions: Coasternerd, GeoUSA, Luke and 5 others