Demon Dive
Demon Dive would pretty much be Griffon with a Holiday layover. As you enter the queue there would be an all new sign over the regular Griffon sign. Scattered through out the queue would be Demons(props), Chains, intense playlist of music to make you very nervous, and little facts like "Get ready to plunge 90 degrees straight down." "Are you ready to dive at 205 five feet in the air?" Also all of the lights would be replaced with red bulbs to give it an eerie atmosphere. As you board the train you notice all the employees are in black robes and aren't looking so cheery.(Ala Haunted Mansion) All of the regular lights that are aimed on the ride and underneath the ride would be off so you really wouldn't know just how tall it is. As you go around the turn at the top there would be speakers making wind noises and creaking sounds. The pit at the bottom of the first drop would be filled with fog and red lights giving the effect of a Pit of Fire. You would go through the pit and Then hit the MCBR. You would hear a deep evil cackle and then plunge to the Rhine. At the bottom of the second drop would be strobe lights that go off when a train passes by. After that the ride would be normal other than maybe a prop by the splash zone. It might sound expensive but think about it. Red Lights, Fog Machines, Strobes,  (The park has those) Large plastic chains 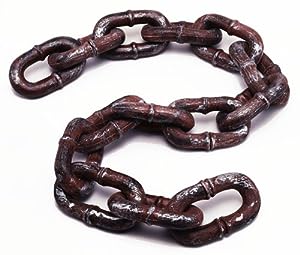 , Demon Props (Nothing too expensive),a sign, and a speaker system. (That would probably be expensive but AC has those and during the regular season they could play the ride theme song. Actually, that's pretty cool when you think about it.).

Demon DJ
Of course the lovely DJ and the giant skull would be back except this time he would actually be spinning real music. There would be stands set up with I-pads that have various songs that would change every hour or 30 minutes and whatever songs get the highest votes are played. Adds a reason to stay and gives the guest interaction.

Demon Drinks
Demon Drinks would be back except would be where the ATM and token machines. If you don't know what I'm talking about it's near Griffon's exit. This way it would have a roof but still be close to the DJ and Demon Dive. And yes the Demon girls will be back as well!

Downtown Demon Street was my solution to the party mixing with scares over in Demon street. Demon Dive gives Passmembers and returning guest a reason to re-ride Griffon. You can decide the songs at the DJ giving you a reason to stay and dance. And then you have Demon drinks with nice Ice Cold Drinks in the Underworld. This addition would also help with the constant clogging in Aquitaine. Over-all would be a nice little addition to Demon Street and another reason to come and check out Howl-O-Scream.

Thanks for reading my concept and I hope you have a spectacular day!
Reactions: SWStevo, Peter R., luseendesi and 6 others
F

I think a demon street might frighten the children park goers especially a downtown one
Reactions: Jake
P

frgnbshgrnz said:
I think a demon street might frighten the children park goers especially a downtown one
Click to expand...

Um i dont think its really scary at all. Have you seen it? Its like a hell themed party. If it was scary it would make sense considering its a HAUNT. BUTTTT were not getting into that discussion again...
You must log in or register to reply here.
Share:
Facebook Twitter Reddit Email Share Link
Consider Donating to Hide This Ad