An incident reported on March 25th that a person fell from El Loco at Circus Circus in Las Vegas, Nevada. Today it was revealed it was a "double amputee" woman.

The woman, who is in her mid-20s to early 30s, was ejected from her seat on El Loco, which goes up to 44 mph when operating, sometime between 2:29 p.m. and 2:35 p.m. on March 25, according to the prohibited-use notice placed on the ride after her fall.

She was taken to a hospital that afternoon, but neither Clark County nor MGM Resorts International, the owner of Circus Circus, have released details regarding the woman’s condition.

The ride, which was built in 2013 by ride manufacturer S&S Worldwide, was closed to the public immediately and was inspected in the days following the woman’s fall by a third-party company approved by the Clark County Department of Building Fire Prevention.

Pappa said the investigation into the fall is ongoing, pending S&S Worldwide’s completed assessment into why the rider was ejected and an explanation of how the manufacturer plans to implement modifications to the ride to avoid another fall, according to the third party’s correction notice submitted on March 29.

In a statement Thursday, the ride manufacturer said, “S&S Worldwide is aware of an incident involving an S&S roller coaster at Circus Circus. Our thoughts and prayers are with the individual involved. At this time, we have no comment and will have no comment until a complete and thorough investigation is finalized.”
Click to expand...

Details have not been released about the nature of the woman's amputations but considering the design of El Loco's restraints it is pretty much guaranteed she has had both of her legs amputated.

I will not comment about the manufacturer, or Circus Circus's operations and I highly recommend everyone to tread lightly until more details are released.
Reactions: lightninlady, Zachary, Mushroom and 2 others

Very interesting. Thanks for providing the information. Seems to me that the issue might be why was she even allowed to ride
Reactions: Zachary

This paragraph in the linked story is notable-

Clark County spokesman Erik Pappa said he could not specify whether the woman was missing her legs or arms, but he confirmed on Thursday that she had lost her limbs before the fall.

Until I read that, I misread the OP that the ride may have caused the amputation(s).
Reactions: belsaas and BGWnut

I had the exact same thoughts initially

Here another article from a local Vegas TV station

Not trying to be funny, but if she were missing her legs, how would she pass the minimum height retirement?
Reactions: Lord_Etho and Thomas

Not trying to be funny, but if she were missing her legs, how would she pass the minimum height retirement?
Click to expand...

Some rides have size requirements based on the torso area, which is why some parks are so finicky with ADA requirements.
Reactions: BGWnut and GrandpaD

FYI Here's a car showing the restraints. The indoor coaster does inversions.

Legs look to be important
Reactions: Zachary and GrandpaD

Not trying to be funny, but if she were missing her legs, how would she pass the minimum height retirement?
Click to expand...

Likely prosthetics which may not even have been permanently attached to her. Many of them are removable. The other thing that as we have gotten better about making them more normal looking it becomes harder to spot them. The ride ops might very well had no idea when they checked the restraints.
Reactions: BGWnut

No idea beyond what was released. Being familiar with Vegas media after 13 years of living there, more info will be released once authorities conclude their investigation.

Months after the incident, the coaster has reopened... 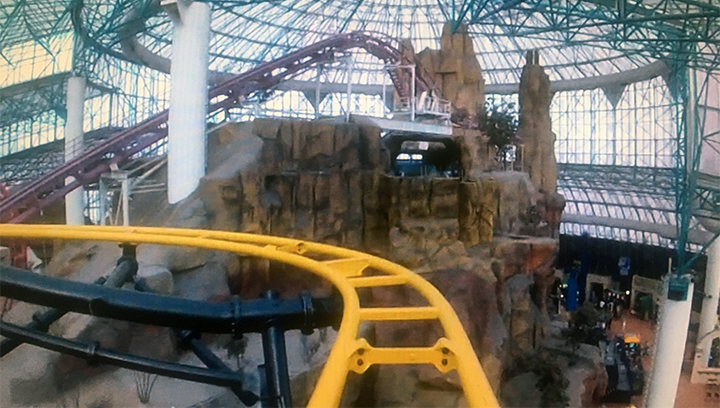 LAS VEGAS (KLAS) — Circus Circus’ Adventuredome reopened the El Loco roller coaster on Friday. The ride was closed back in March after a woman, who is a double amputee, fell from the ro…