Nicole and I have been increasing our credit whoring efforts over the last year or so. These quests have taken us to a few interesting corners of the country. For whatever reason though, I have yet to write a single trip report about any of these adventures.

With that in mind, I'm going to test the waters with this trip report. If you'd like to see more writeups like this about some of the less popular parks out there, let me know and I'll consider doing this more often.

Anyway, with all of that said, I'm going to kick things off with an amusement park (supposedly) named Boardwalk Amusements located in Daytona Beach, FL.

Located right on the Daytona Beach boardwalk, without anything even resembling a sign, is a fascinating assortment of amusement rides. According to RCDB.com, this park is named Boardwalk Amusements—though there is nothing hinting at that in person.

The park consists of a series of portable attractions setup in a concrete and mulch lot surrounded by touristy surf shops and towering hotels. A few hundred feet down the boardwalk from the park is a large pier with a monumental Joe's Crab Shack at the end of it.

Nicole and I had never been to the Daytona Beach boardwalk before, but honestly the environment should be instantly recognizable to anyone who has visited any east coast boardwalk area previously (such as the VA Beach Oceanfront, the Jersey Shore, etc). 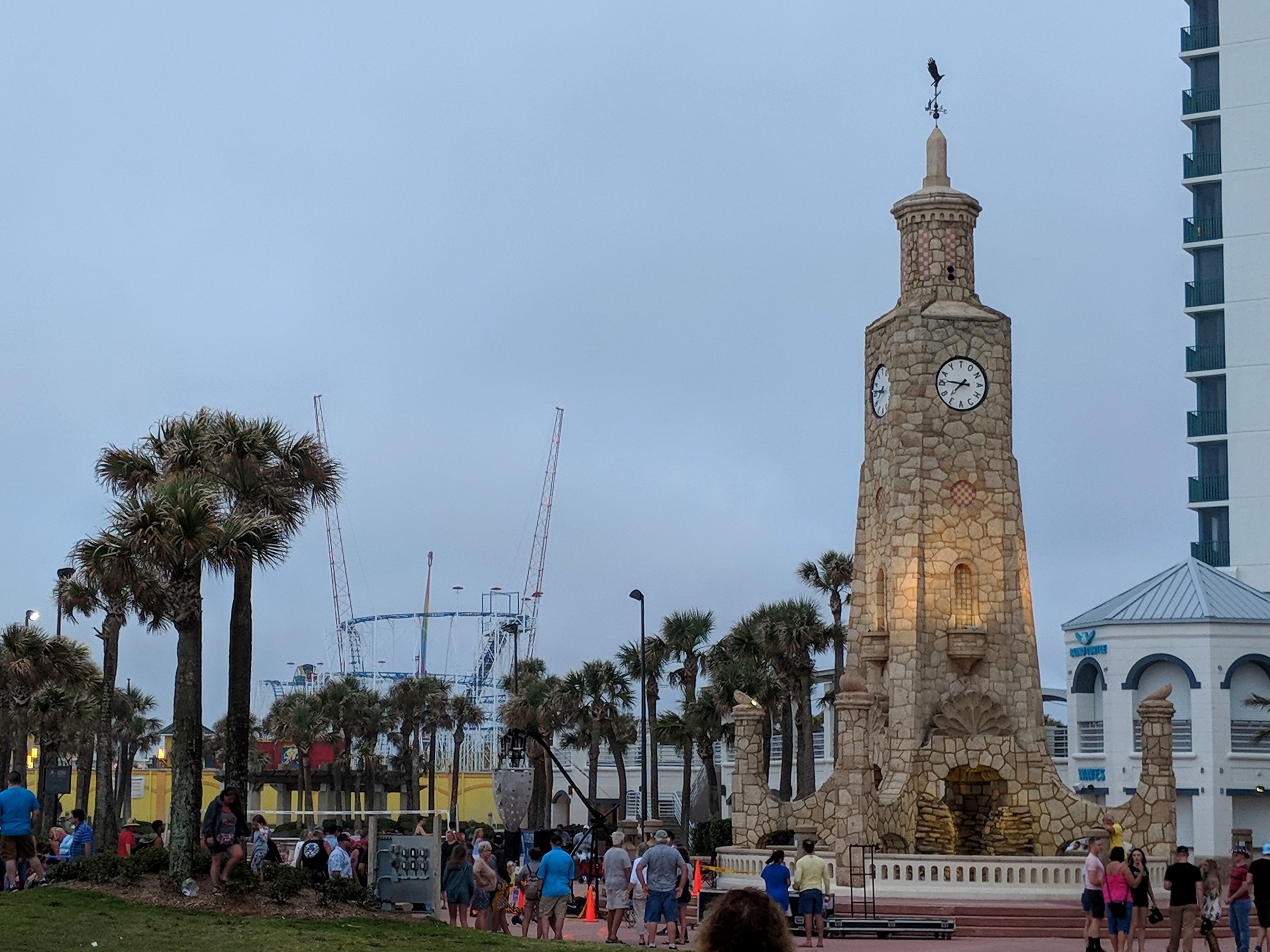 Now, let's get into the actual park.

Scattered around this mulch and concrete lot, visitors find two roller coasters, four major flats, a sprinkling of childrens flats, and a generic, trailer-mounted funhouse. There are no wristbands offered, and a picture of the ticket booth's price list can be found below. 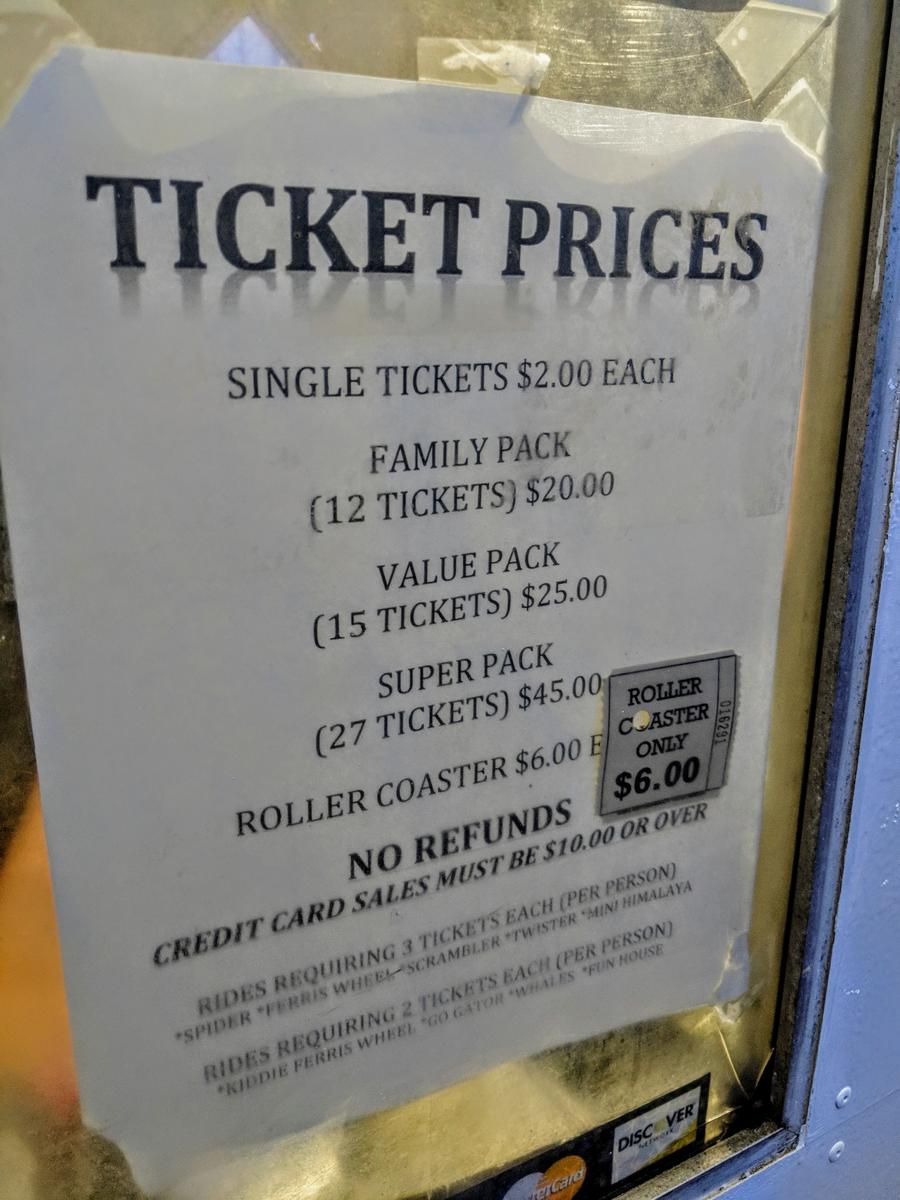 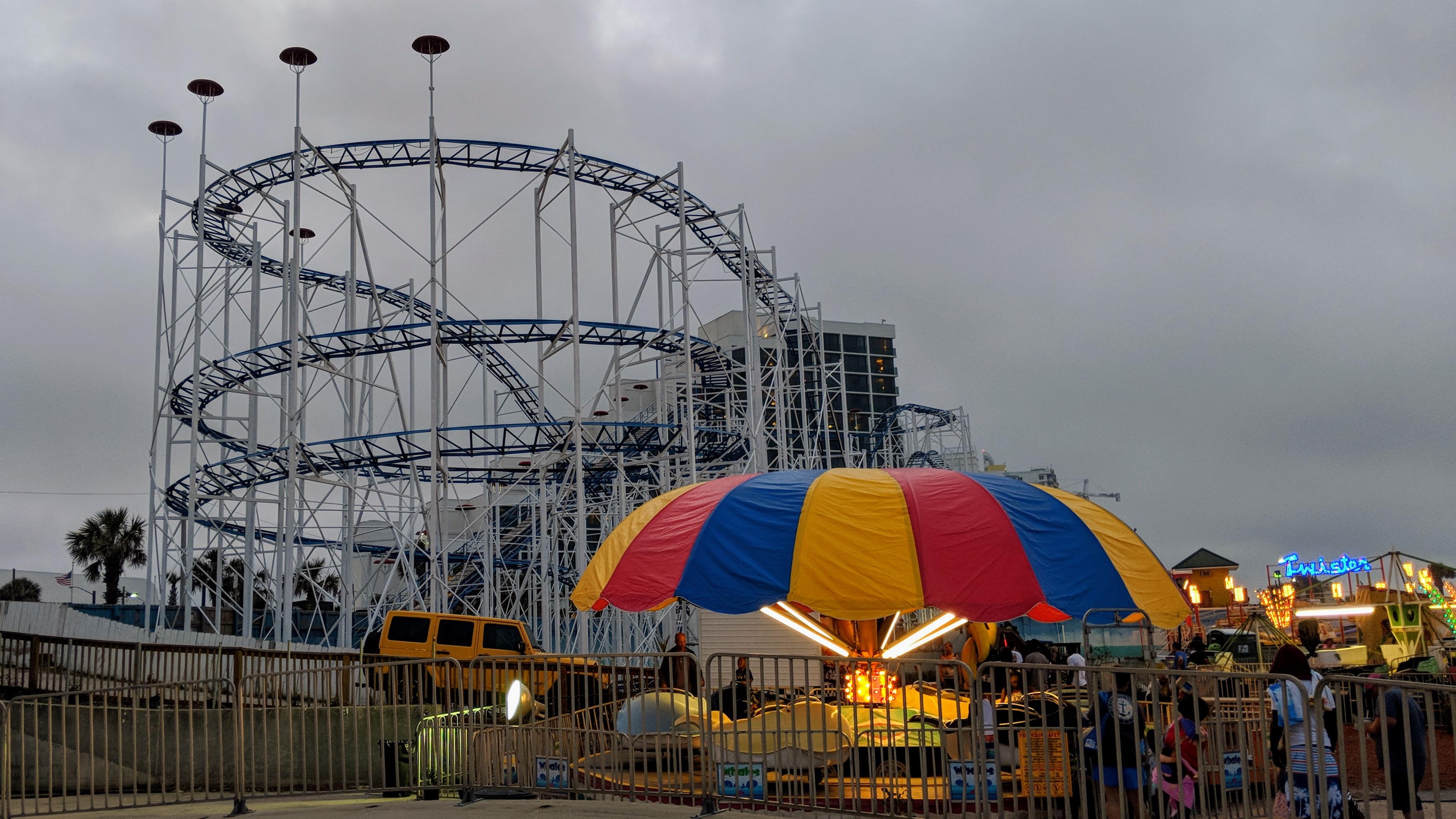 Sand Blaster was my first Pinfari Zyklon Z64 and I must say that I came off far happier with the experience than expected. The coaster is surprisingly smooth and features relatively comfortable trains and restraints. In the back car at least, the coaster's drops were a pleasant surprise as well. As much as I love Schwarzkopf, I have to say that this Pinfari Zyklon was better than any Schwarzkopf Wildcat I've experienced.

Sand Blaster certainly isn't without its quirks though. It runs a three car train, but Boardwalk Amusements only loads the front and back cars. Why? The entirety of the middle car is fully loaded with cinder blocks. I've ridden a lot of coasters, but riding with stacks of cinder blocks was certainly a first for me. Additionally, (as Nicole reports she experienced on the Zyklon she had ridden previously), it took a team of ride ops physically pushing the train along the platform to get it up to speed so the train could make it to the lift hill.

Go Gator is a typical, off-the-shelf Wisdom Rides Go Gator coaster. Unfortunantly, like most Go Gators out there, adults are not allowed to ride. 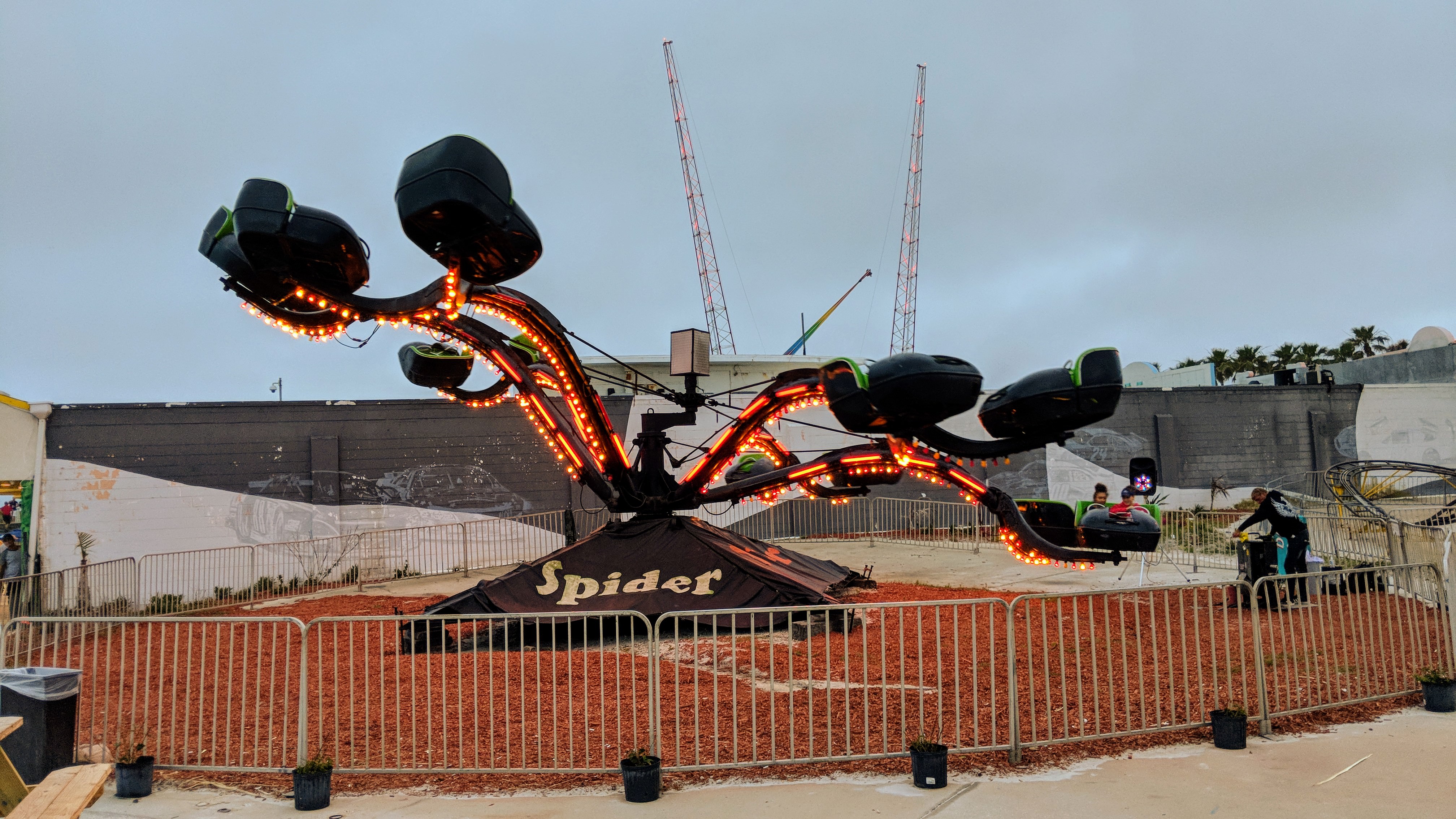 Spider is, as you might expect, an Eyerly Aircraft Company Spider flat ride. Spiders have long been one of my favorite "classic" flat rides so I had high expectations for this one. Although the ride cycle was quite lengthy, I have to say that this was one of the weakest Eyerly Spiders I've ever ridden. Upon closer inspection, for some reason, this spider is actually setup on an incline. Whether or not that was the cause for the lacklust ride, I don't know, but it's certainly atypical. 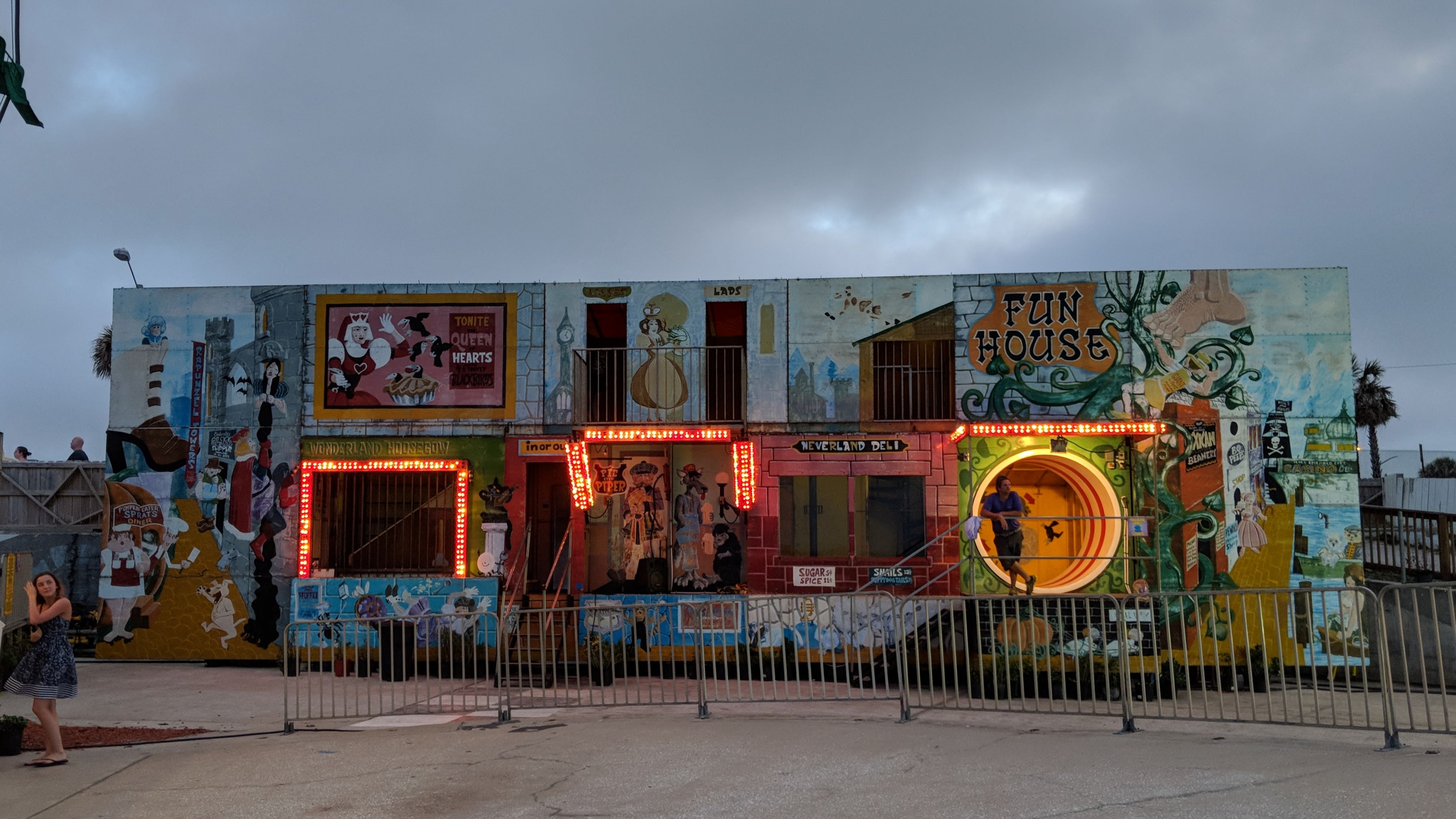 Fun House is a generic, trailer-mounted fun house. Credit to anyone who knows who the manufacturer is, because I certainly don't. Anyway, the operator who took our tickets actually warned us ahead of time that "it's not worth it." He was right.

A total of two effects may have still been intact. Furthermore, the entire structure and everything inside of it was covered in rust. It was in truly abysmal shape and I'm actually surprised the lawyers are still allowing people to walk through it... assuming the lawyers even know it exists...


We opted not to ride the Ferris Wheel (which did have a nice lighting kit) or the Scrambler. Additionally, I don't have a comprehensive list of the kiddy flats, but there were a few of them onsite. Anyway, now for the crown jewel of Boardwalk Amusements... 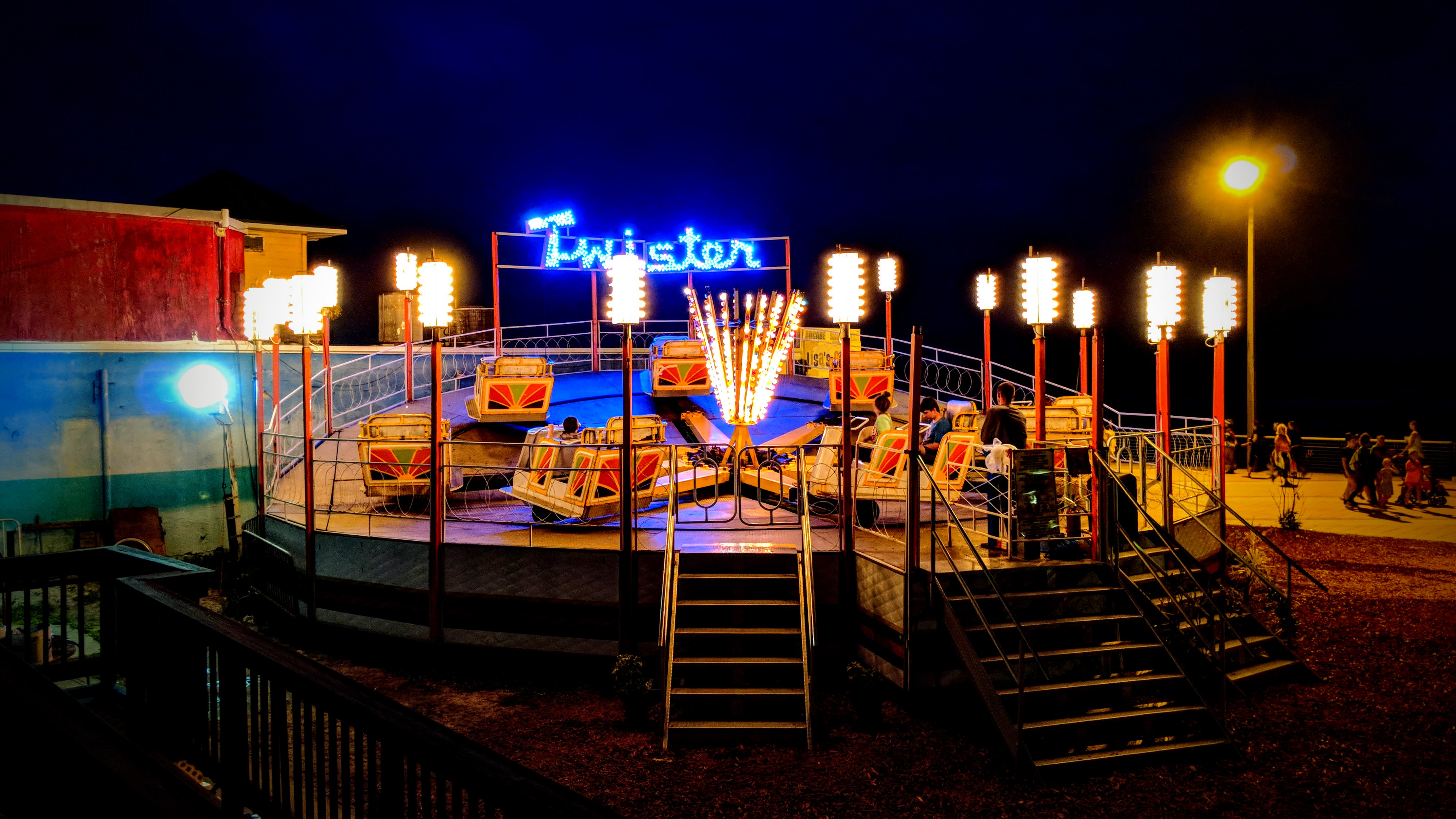 Twister is a rare, Allan Herschell-made Twister. I have always wanted to get on one of these and, frankly, before visiting Boardwalk Amusements for myself, I had no idea they even had one. (If you want a challenge, try to find any information about this park online.)

So how was it? Frankly, godlike. It is, far and away, the best spinning flat I've ever ridden in my life. Honestly, it's not even a contest. It was an incredible experience.

Walking up to Twister, no one else seemed to be giving it much attention. The ride op was sitting on the steps leading up to the ride platform and, as he saw us approach, I swear, a devilish smirk crept across his face.

I'm sure he saw two, totally unsuspecting adults walking up to this sketchy-looking flat ride expecting a nice Tilt-A-Whirl-like experience. Truthfully, he was right. I've never seen anyone discuss this ride model before. I expected a slightly faster Tilt-A-Whirl. How wrong I was... 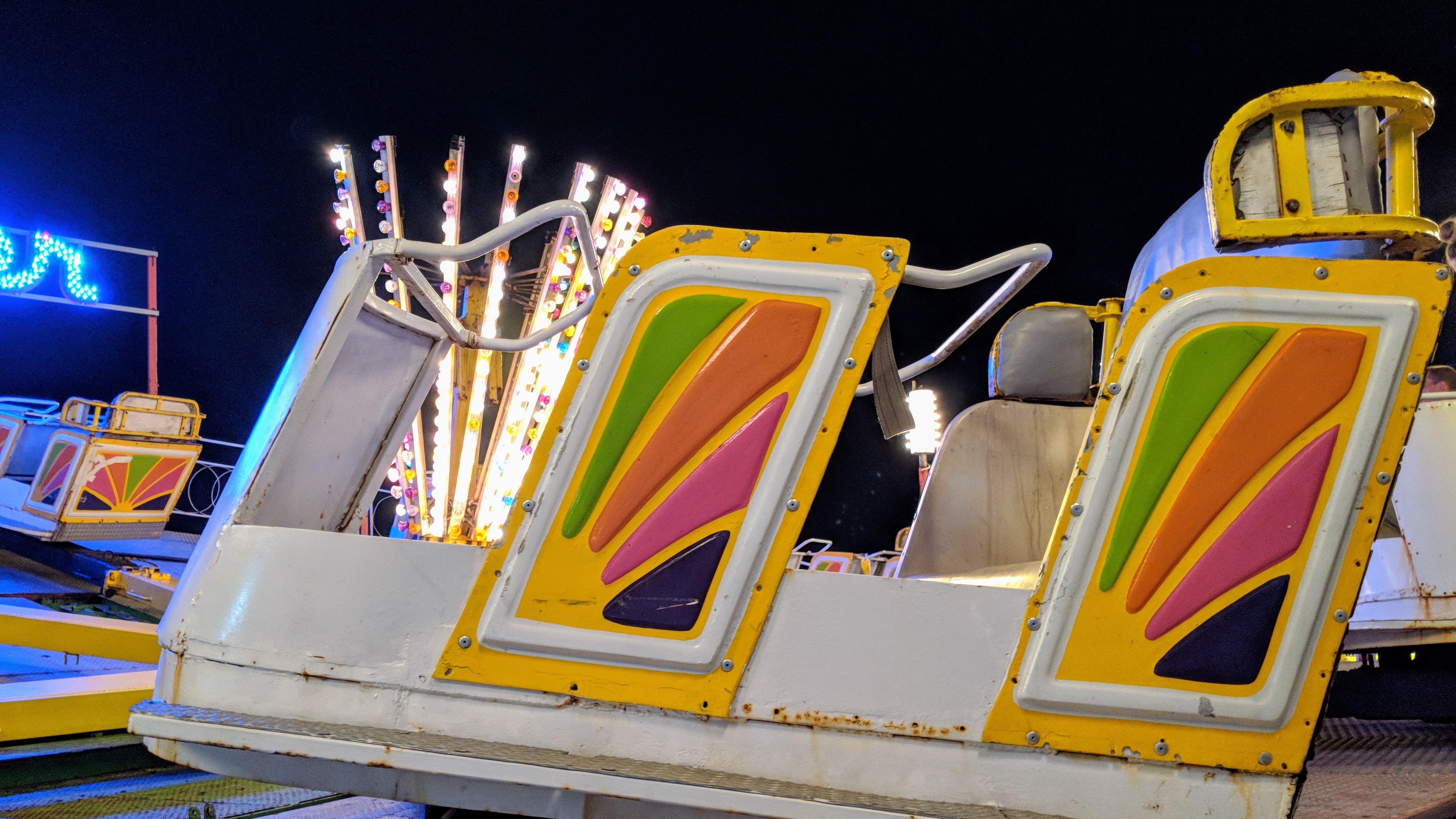 As we contorted ourselves to fit into the bizarrely-constructed ride vehicles, the operator told us that this thing "spins very fast" and told us that if it got too intense, we should raise a hand, and he would either slow or stop the ride for us.

At the time I totally blew him off. I have some absurdly intense rides under my belt. I thought "There's no way in hell some 1950s-era Allan Herschell flat will break me!"

Narrator: "It damn-near broke him."

My ride on this flat was absolutely insane. I sat in the back seat (read: furthest from the center of rotation) and this proved to be the right choice. The centripetal force vastly surpassed any I've ever experienced elsewhere.

The ride quickly spun up to the point of paralyzation. Now, I know what you're thinking, "Yeah, but a fast-moving Wisdom Gravitron can get to that point!" While you are correct, I assure you, Gravitrons and Round-Ups have nothing on a well-run Allan Herschell Twister. It's truly an entirely different level. No matter how I tried, I couldn't move a single part of my body.

Remember that ride op? He knew exactly what he was doing. He wanted us to surrender. He played the ride like a fiddle—expertly accelerating and decelerating the motor to keep our car spinning at the maximum speed possible.

Truthfully, as much as it scars my ego to say it, I got very close to surrendering. At times, the spinning was so intense that I actually had a real, notable difficulty getting full breaths of air as my lungs actually began to feel compressed within my ribcage.

And, before anyone starts getting the wrong idea, yes, I fucking loved this thing. 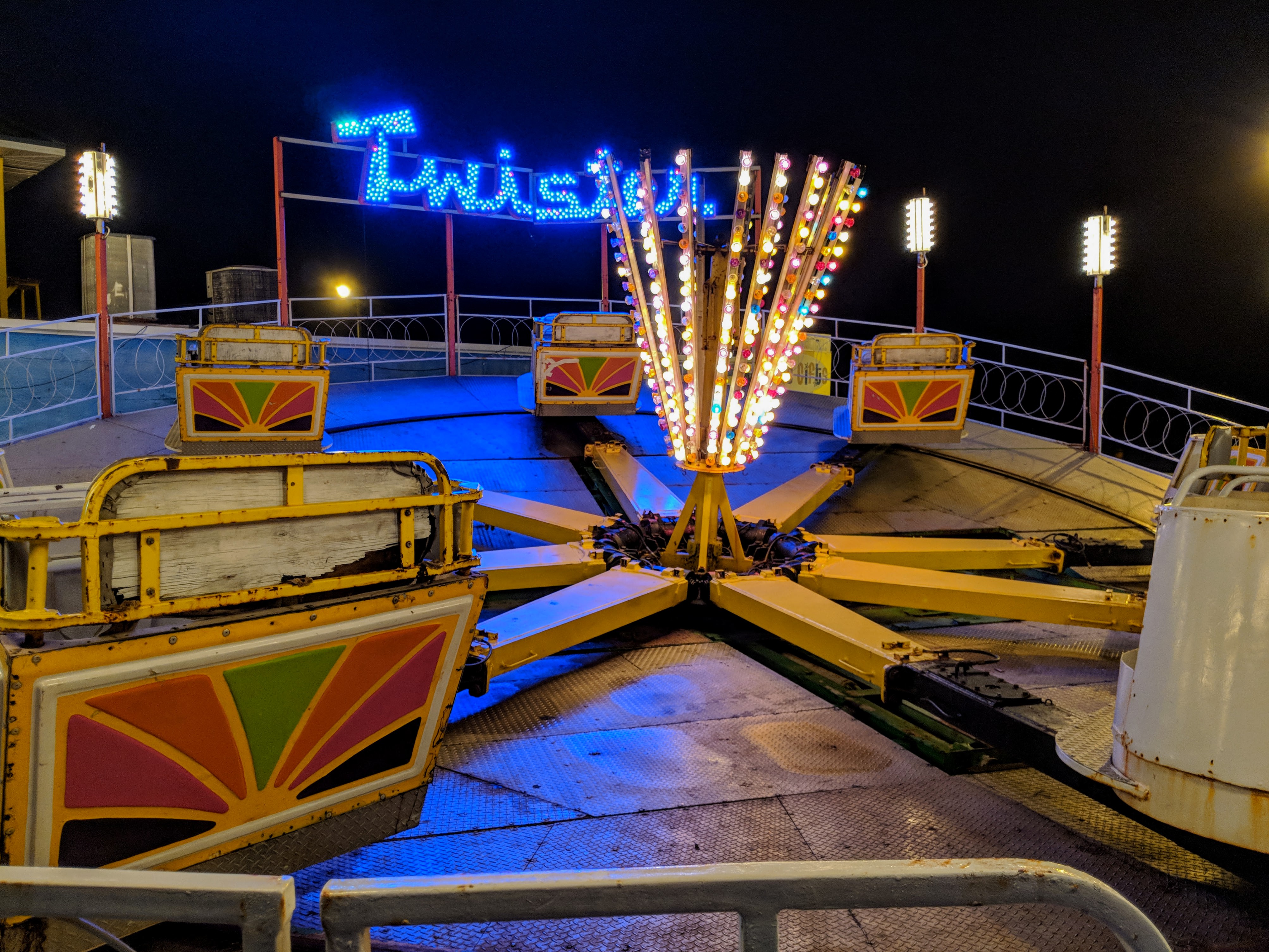 Anyway, after a ride cycle that truly felt like an eternity and a half, the operator brought us to a gentle stop and we exited Twister. I don't know the ride op's name, but he was a master at his craft and I can't possibly thank him enough.

Oh, and before you worry too much about that ride operator not getting the surrender he was looking for, don't. The next cycle we saw Twister run (a bit after our ride—the park wasn't busy), ended quickly after the riders put a hand in the air and gave into the power of this over-60-year-old classic flat ride.

Conclusion​
Despite many overwhelmingly negative TripAdvisor reviews ("If you value your dignity, stay away from the Boardwalk" being my favorite), at least when we visited, the Daytona Beach Boardwalk didn't actually seem all that horrible. It's far from the nicest beachfront area I've ever visited, but I wasn't worried about being mugged or anything, so I count that as a win.

Boardwalk Amusements is very small and only really has three or four rides that are worth anyone's time (Sand Blaster, Spider, Twister, and potentially the Ferris Wheel). That said, prices really aren't that bad given the location ($6 for a solid coaster credit is actually a pretty good price in my experience). Plus, Spiders are becoming increasingly rare and Twisters are near impossible to find.

Frankly, if you like retro flats and you're anywhere in the vicinity, Boardwalk Amusements is well worth a quick visit if only for Twister. If you're just searching for coaster credits though, Sand Blaster probably isn't worth much of a drive.
Reactions: RollyCoaster, MAZ, Jesy and 8 others

Zachary captured most of our experience.

I ended up in front seat on Twister, and evidently didn’t have nearly as intense a ride as Zachary. It was fun, and there were a ton of forces, but I was certainly never paralyzed. I do think the ride op was trying very hard to make us surrender.

I adore Spiders, and theirs was fun. But I agree with Zachary, it was a milder ride than most. Idlewild actually has the best Spider I’ve been on, since Busch took out theirs.

I think Sand Blaster was slightly rougher than Mouse Trap in Wonderland a Park in Amarillo, TX. Certainly, not as well maintained.

The fun house was terrifying. It more closely resembled a rusted out shack than an amusement park attraction. I honestly expect it to collapse under a guest.
Reactions: Zimmy and Zachary

I love this little park! Sand Blaster was a pleasant surprise to me since I had only ever heard bad reviews of Pinfari coasters, but this one feels darn close to a Schwarzkopf classic.

You guys also experienced part of their big formula, so I see. They always have about two or three flat rides that are switched out frequently. It seems like one of them is always intended to make you cry for Mommy.

I don't remember what the "big" ride was the last time that I went there, the ride op looked furious that I was simply having a great time. He laughed afterward, though. All I know is that the ride spun fast and it raised up and down like an adult-sized "Roto Baron" and then it dropped.

Spinning rides usually don't do much for me, but I love a classic Tilt-A-Whirl. They sometimes have one, but I enjoy seeing something new each time and would even say it's worth a repeat visit if in the area. The funhouse looks very shady, though. ;-)
Reactions: Nicole and Zachary

I'd be super curious to know when you last visited! It sounds like there was some big shakeup in the management of the place last year. Link
Reactions: Nicole

^ I feel pretty sure that I have visited since 2013, but that is the last time that I can find photographic proof. The park was rather empty that time and the ride operator on Sand Blaster left a lonely spray bottle sitting on my car and he had something funny to say about cleaning up "just for me."

Here is the flat ride that I was talking about. On this ride, the operator also had a lot of control over the experience. It looks innocent enough, but the way other people reacted tells me that my thoughts about it might not be the general consensus. 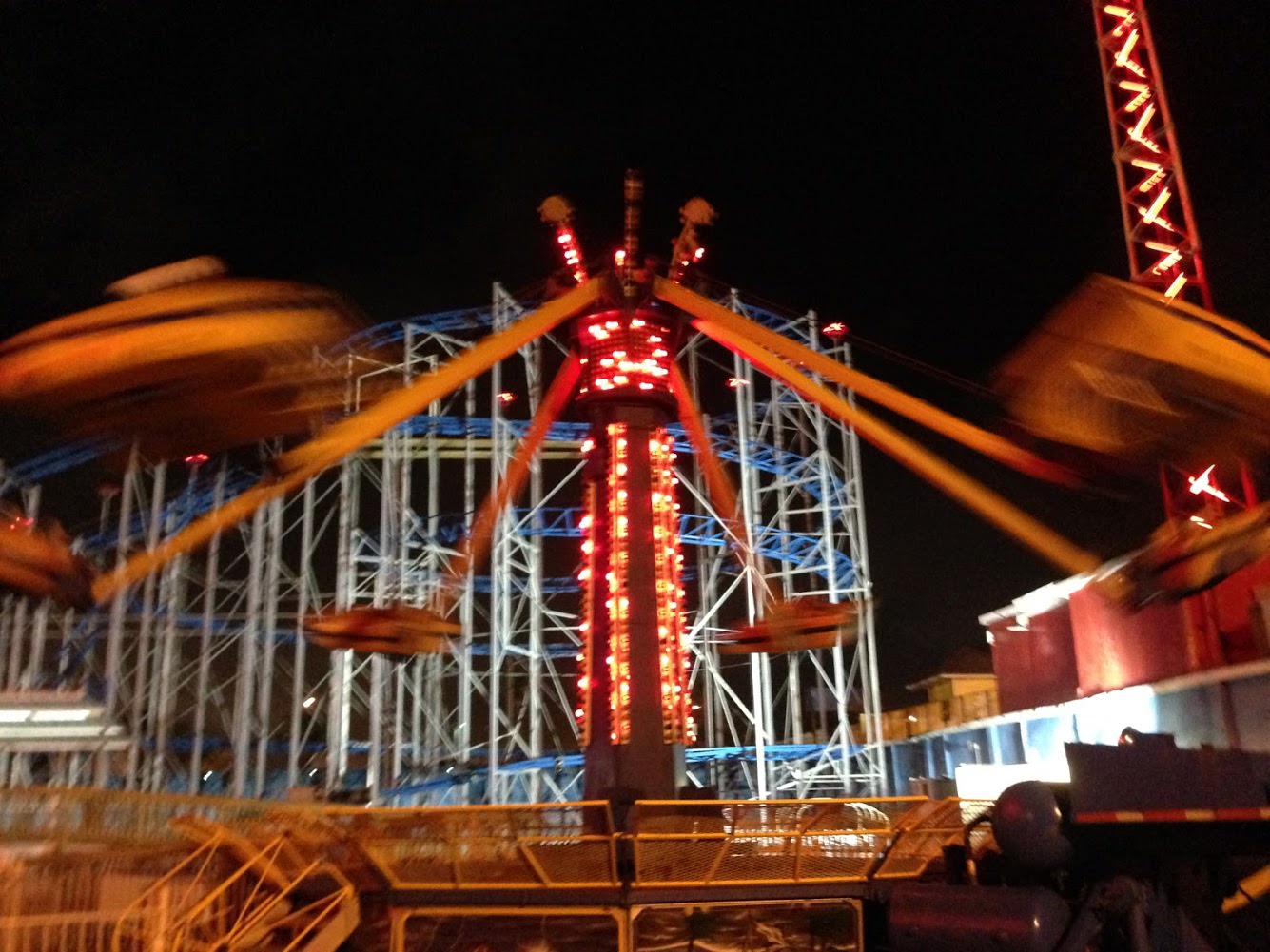 I don't know enough to distinguish between the various manufacturers who have built them over the years, but that looks like a Hurricane of some sort to me. Link for reference.
Reactions: CastleOSullivan